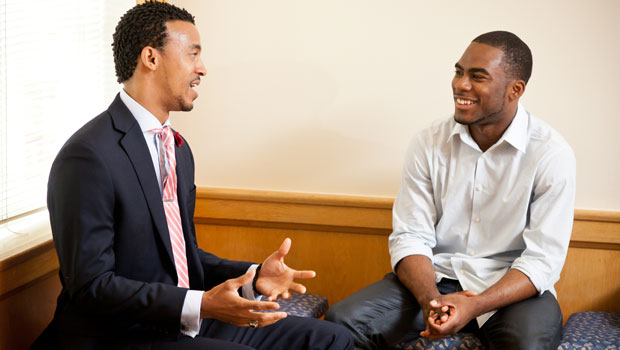 Started by the Office of Multicultural Affairs, the M4 Initiative brings together male African-American students for weekly meetings to talk about issues of masculinity and manhood, higher education, families and relationships, spirituality, and other topics.  Through a mixture of discussions, readings, videos and pop-culture media, the group explores contemporary issues facing African-American men.

Kevin Smith, a senior from Wilson, N.C., shares his experience with M4 and explains how it has made a difference in his life:

Wake Forest has bestowed upon me some of the greatest gifts that one could ever hope for and I have amassed a great wealth of both social and intellectual capital during my time here. However, when looking towards the conclusion of this wonderful four-year phase in my life, I realized that I still had desires that were yet to be fulfilled in my Wake experience. Through the M4 Initiative led by Jonathan Cox, the assistant director of multicultural affairs, I was able to discover exactly what I was looking for: a forum to carefully analyze, discuss and become educated about the unique experiences that we as black male students face. The program provided an opportunity that was priceless and truly provided enhanced lenses through which I view myself and, ultimately, society at large.

I became interested in the program during my junior year, and fortunately I found the time to participate my last semester. I was familiar with what M4 stood for — Making Manhood Mean More — however; I certainly underestimated how life changing the experience would prove to be. As an eclectic group of black men ranging from first-year students to seniors, the eight of us were able to candidly express our concerns and feelings about society, examine and analyze our own state of being and, most importantly, assert our individual purposes as young men in this world. In each of the weekly sessions, I absorbed as much knowledge as possible and my anticipation for the next session was powerfully fueled by the positive experiences from the previous week.   Our mission was to cover a wide variety of social issues and, though ambitious, the goal was ultimately achieved. Rather than search for the magic bullet solution to answer all of the questions of the black male experience, we approached our goal week by week in hopes of building a greater sense of knowledge.

We began the first week with the topic, “What does it mean to be a black man?” where we reflectively discussed an assigned reading: “Doing Fake Masculinity, Being Real Men: Present and Future Constructions of Self among Black Men,” by Kristie Ford. This proved to be the perfect text to initiate our journey as it prompted us to begin formulating thoughts involving self-identity.

The course concluded with a discussion entitled “Spirituality; Navigating Society without Compromising Your Identity.” Discussing spirituality served as the perfect concluding topic. It gave my peers and I the opportunity to display how much we had both mentally and spiritually developed during the nine weeks in M4.

Though the beginning and ultimate sessions of the program were certainly memorable, there were also various points along the way that strongly contributed to the overall strength of the initiative. I arrived at a greater understanding of the meaning of manhood through inspiring words from guest speakers such as Office of Diversity and Inclusion Program Coordinator J. Matthew Williams; Magnolia Scholars Program Director Nate French; and English Lecturer Colin Craig. Faculty members also shared stories of how they navigated through the experience of being in college as black male students.  Additionally, Williams and French are Wake alumni, so their insights were particularly valuable because they have experienced the topics that we discussed from a student role as well as on the administrative side.

To claim that the eight of us “learned a lot” would be an extreme understatement.  We were encouraged and enlightened, prompting us to grow as stronger campus leaders, greater members of society, and ultimately better people.

It is amazing to reflect upon how much I’ve matured. I can honestly say that through M4 I have witnessed one of my greatest periods of personal growth. As the initiative continues, I hope that it will prove resourceful for every student who is looking for inspiration and an engaging journey. Enrichment, fellowship, knowledge and increased self-awareness are everlasting gifts afforded by the program.

Although our generation’s black male experience in America is matchless in its character, M4 has provided a substantive model that can be adapted for other student groups as well. In fact, the initiative has already inspired a sister program, WE3 (Women Encouraging Exploration and Empowerment) that focuses on the minority female experience in college. I hope that more underrepresented groups will embrace M4 as an exemplary prototype and utilize and restructure it to their advantage. As minorities, if we can promote being part of a rich Wake Forest culture and enjoy a more inclusive and diverse campus, while still maintaining our own identities and culture, then we will have lived up to the University’s motto of Pro Humanitate.