Born to be Demon Deacons 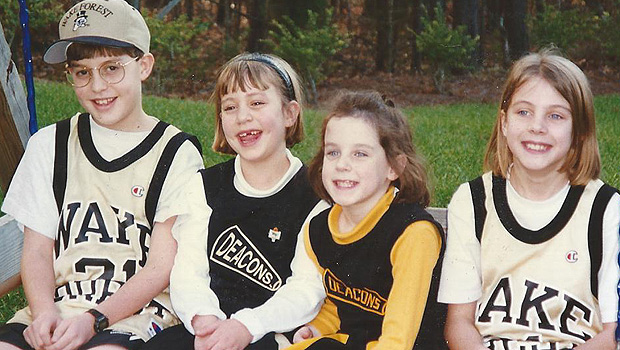 Everyone at Wake Forest shares a special bond, but seniors Curtis Vann and Emily Roach have more in common than most from the Class of 2012. They were born to be Demon Deacons.

Not only do both come from a long line of Wake Foresters dating back to the old campus, their fathers became best friends and roommates in Taylor Hall more than 30 years ago.

On May 21, the lifelong friends received their diplomas from Wake Forest, just like several generations before them. 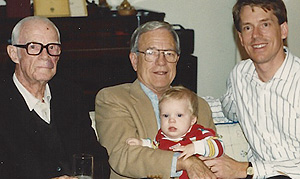 Curtis is a seventh-generation Wake Forest student following in the footsteps first laid by his great, great, great grandfather Alexander Russia Vann, who graduated from the old campus in 1847 – just 13 years after the college was founded. His great grandfather, Herbert Vann (‘15) became a legendary physician and professor at Wake Forest School of Medicine; his grandfather Robert “Bob” Vann (‘BS 42, MD ‘45) remains a highly respected physician, clinical researcher, and entrepreneur.

With more than a dozen ancestors spanning the next 170 years of Wake Forest history – including his father, John Vann (’80) – many prospective college students would feel immense pressure, but not Curtis.

“My family always supported, respected and loved Wake Forest and I always knew I wanted to go,” said the political science major from Bristol, Tenn. “I never felt pressure.” 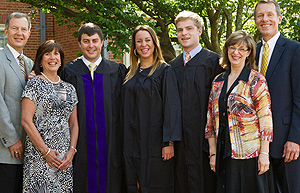 In fact, both of Linville and Mary Jon Roach’s children – Gerald and Virginia “Ginny” Roach Lawson (’83) – and all four grandchildren are Demon Deacons, three of them in the Class of 2012. Emily’s brother, Davis (BA ’09, JD ’12), became a Double Deac upon hooding from the law school. Their cousin Michelle Lange received her BA in German this year; their other cousin Allison Lange graduated in 2010.

“I love Wake Forest because it’s something my whole family shares together,” said Emily, an elementary education major. “There was never pressure. It was just something we all loved.”

They were small when legendary center Tim Duncan (’97) played for the basketball team, but both recalled trying to make an impression on the big guy.

“From the time Curtis passed a basketball to Tim Duncan and Tim said, ‘Thanks, buddy,’ Curtis already thought he was part of the team,” said Curtis’ father, John.

Emily said, “I remember I drew a picture for Tim Duncan and really wanted to give it to him. My dad walked me down to the court so I could bring him the picture. Tim’s dad took it for him, and he was so nice. I always thought that showed a little bit about the type of people Wake attracts.”

Though their parents remained close and vacationed together over the years, Emily and Curtis only knew each other as acquaintances until high school. That all changed at the 2007 Orange Bowl, when the juniors in high school traveled with their families to support Wake Forest, their future alma mater.

Emily and Curtis’ friendship continued to grow throughout high school thanks to text messages and emails, mostly about campus visits and the college admissions process. 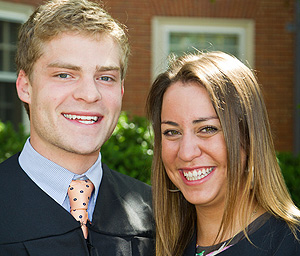 Once they became students at Wake Forest, they hung out, made mutual friends, attended social functions together and even became neighbors.

“Now, senior year, I live on Polo Road and she lives right across the street. I see her all the time,” said Curtis. “It’s funny. My dad and her dad ended up living together and stayed in close contact. Now I’m living right next to her.”

Emily added, “Our parents get a big kick out of it. Before the last basketball game, my parents were in my driveway and his parents were at his. We could wave across Polo Road.”

Though all parents are proud of their college graduates, the 2012 commencement ceremony was extra special to the Roach and Vann families.

“We’ve tracked the same kind of course. It’s been great for Curtis to have both Emily and Davis on campus,” said John. “It’s been fun for Karen and me to go through their college years with Gerald and Stephanie. It helps us see that Wake has grown in the right ways but the foundation is what it needs to be.”

Gerald added, “Of the folks we met freshmen year, there are still four of us who see each other regularly – including John and me – and we have ever since. That’s a very special bond. Stephanie still sees people from her freshman hall regularly as well. In one sense, our experience is just an example of the experiences that many people have at Wake Forest about making lifelong friends.”

For Curtis and Emily, who are excited to start the next chapters in their lives, they know that they, too, have found lifelong friends in each other.

“I think Wake is truly special, from the accessibility of professors to my relationship with other Deacons like Curtis. I’ve run into WFU people all over the world, and there is such an immediate bond,” said Emily. “For me, that bond is even stronger knowing I’ve shared the experience with my family.” 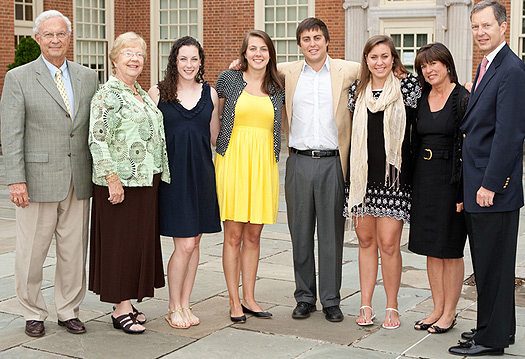 A tale of two roommates 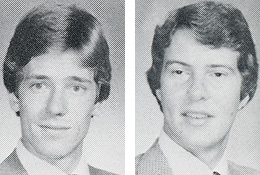 John Vann and Gerald Roach in 1979

Today, Gerald Roach and John Vann remain active supporters of Wake Forest. Gerald is a Trustee who also serves on the Parents’ Council with his wife, Stephanie. John currently serves on the College Board of Visitors.

They have come a long way since they met freshman year, were suitemates sophomore year, and roomed together junior year. In addition to reflecting upon their children’s upcoming graduation, they reminisced about their own college days at Wake Forest.

Here they are in their own words: 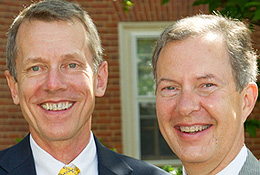 John: “Basically, Gerald got me through History and I got him through Spanish!”
Gerald: “I don’t remember getting him through History at all…”
John: “Gerald is a brilliant man, and we just studied together. I was terrible with dates and I even struggled with the date of the War of 1812.” (laughs)
Gerald: “But I remember him getting me through Spanish in great detail.”
John: “I met Gerald in a Spanish class. He lured me into his suite to help him.”
Gerald: “I might have had to bribe him a little bit.”
John: “He likes to tell this story…”
Gerald: “Wake Forest made it to Sweet Sixteen and Elite Eight that year (1977). The tournament happened to coincide with Spring Break, so I took a road trip to Oklahoma City, where the Midwest regionals were. At that time, Coors was only distributed in the Western United States, but it had a reputation. So I brought some back and offered him one to help me with my Spanish.”
John: “That was when you couldn’t get Coors beer on the East Coast. But I don’t remember that being the sole motivator! Regardless, we became good friends and still are.”

John: “At that time, we didn’t realize the connection there, but he was very helpful to me professionally.”
Gerald: “One of the things so special about the sale of his family-owned business was to see how his decisions were driven by wanting to take care of his employees and doing what was right by them.”
John: “It was a great gift to come years later to have someone I knew and trusted as much as I did Gerald to help us do the right things at the right time.”