Grappling with the cost of debt 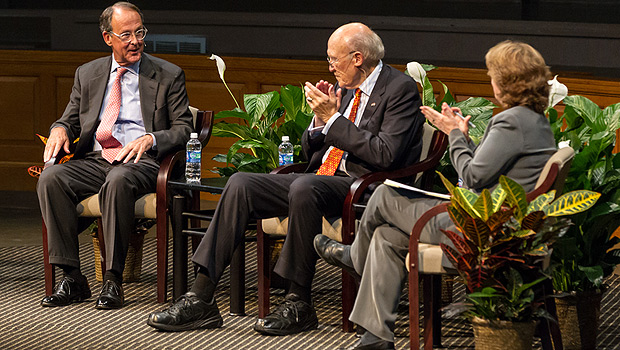 With just six weeks until the presidential election, it is rare to find political leaders from both sides of the aisle making joint appearances unless there is an organized debate – especially in a swing state such as North Carolina.

But on Sept. 25, Wake Forest hosted “American Debt and Deficit Crisis: Issues and Solutions with Alan Simpson and Erskine Bowles.” 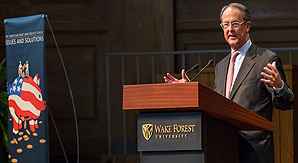 View a photo gallery »
View video of the event »

“We’re running out of money. We’ve got to start thinking,” said Bowles, paraphrasing Nobel Prize winner Sir Ernest Rutherford. “We have to make tough choices and set priorities. If we do that, the future of this country – your country – will be all right. If we don’t, we’ll be well on our way to a second-rate nation.”

Voices of Our Time

TIME Magazine columnist and bestselling author Joe Klein will take the stage for the next installment of the Voices of Our Time series.

The event, “Exploring the State of the American Dream: On the Road in America with Joe Klein,” will take place in Wait Chapel on Wednesday, Oct. 10, at 6 p.m. It is free and open to the public as part of the Rekindling the American Dream Conference.

The event was part of Wake Forest’s Voices of Our Time speaker series, which brings the world’s thought leaders to campus for discussions on important issues.

India Prather (’13) had an “aha” moment when Bowles explained that mandatory spending (on programs such as Medicare, Medicaid and Social Security) and interest on the debt account for every dollar the U.S. makes. Meanwhile, money that covers defense spending, education funding, infrastructure improvements and many other programs are borrowed at a rate of 41 cents to every dollar spent.

“As a political science major, I typically focus on how national problems affect the political parties and how the parties use certain issues to their advantage. Tonight Simpson and Bowles focused on the economic aspect,” said Prather, a senior from Charlotte, N.C. “The numbers really have a wow factor. They were in your face. I’m walking away feeling more empowered because I’m now more aware of our national debt situation.”

Alan Simpson talks with a group of students.

Prather and fellow political science major Taylor Harvey (’13) were among a small group of students who discussed the debt crisis with Simpson prior to the public address.

Harvey, who interned this summer for the Bipartisan Policy Center, a Washington, D.C.-based think tank that promotes bipartisan solutions to the various policy challenges the nation faces, said he believes that young voters should care about debt issues now more than ever. 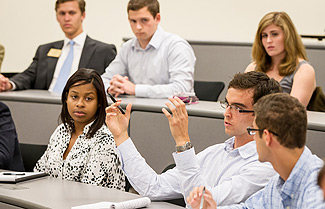 “Politicians constantly use young people as an excuse for why we need to get the debt under control, to ‘give us a future,’ they say. But when bipartisan debt proposals get introduced, nothing happens because neither party wants to concede that the other side is even half right,” Harvey said. “It’s really a matter of when, not if, we have to address the debt in a comprehensive way. The sooner we act, the less pain there will be in the long term.”

Simpson and Bowles both thanked N.C. Sen. Richard Burr (’78), who attended the event, for putting politics aside and reaching across party aisles – a challenge that so far has prevented the commission’s recommendations from being adopted.

“If you can’t compromise on an issue without compromising yourself, you shouldn’t be in a legislative body, that’s for sure. For that matter, also don’t get married, do a contract or get into business,” Simpson said. “If re-election means more to you than helping your country when it’s in need, then you do not deserve to be in Congress.”

For Prather, a greater understanding about the politics of policymaking presented a real learning opportunity.

“The hard part is the ‘so what?’ It all starts in educating people like myself to care,” she said. “A lot of people here at Wake Forest are politically inclined, so it’s easy to discuss it and go lobby. The challenge I present to myself is to take it and go back home and talk to my peers about it to see if they can become more involved in these types of issues.”