See the world through another’s eyes 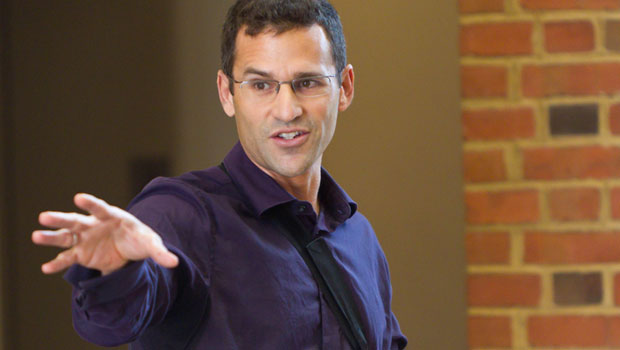 A new book written by Associate Professor of English Dean J. Franco, “Race, Rights, and Recognition,” looks at modern Jewish-American literature since 1969. To better understand how Jewish Americans experienced their identity, Franco read great works by Jewish writers in order to “think along” with them.

Franco, who is a co-founder of Wake Forest’s Humanities Institute, says he began thinking about the topic of Jewishness in America in 2007 after finishing his first book, “Ethnic American Literature: Comparing Chicano, Jewish, and African American Writing.”

After spending years reading and investigating literature written by minority ethnic groups, Franco has developed a broad social and historical understanding of U.S. cultures, which he uses to interpret stories about social and racial issues of the time. He then takes this broad approach to his students – teaching them to use works by writers from different races to see the world through another’s experiences.

“Great literature is inexhaustible and generous,” says Franco. “And literature can strip a reader of all his or her presumptions. I teach my students how to read literature to upend convention so they can imagine new ways of living in the world.”

Franco has several projects underway and recently traveled to Los Angeles to explore Jewish and Chicano neighborhoods and the boundary markers used by both communities to demarcate territory.

He is also writing about Helena Maria Viramontes’ novel, “Their Dogs Came With Them,” about a neighborhood in East Los Angeles. “Viramontes’ novel is one of the best books of the decade,” says Franco.

Viramontes will speak at Wake Forest in February.

What inspired you to write this book?

The American Jewish experience intersected with, but was very different from, that of other minorities. Writers like Philip Roth, Cynthia Ozick, and Saul Bellow explored the political, ethical, and philosophical foundations of concepts like ‘race,’ and ‘recognition’ in their works. When I realized that no one had previously taken this literature seriously as an engagement with the social issues of the day, I was eager to begin writing.

What kind of research did you do for your book?

For the first half of the book, I looked at writers who comprise the staple of the contemporary Jewish American literary canon. I began with a hunch, for instance, that Roth was thinking about race when he was writing “Portnoy’s Complaint.” With support from an Archie Grant, I went to the Library of Congress where Roth’s archives are kept, read his research files and looked at his manuscript drafts and notes. Sure enough, Roth had amassed a considerable file on New York City civil rights policies and had heavily annotated documents on human and civil rights remedies for the city.

For the chapter on Ozick, I worked with a graduate student to research the print journals in which Ozick’s early short fiction appeared, especially Commentary Magazine.

The second half of the book looks at how contemporary writers are addressing the new realities of global multiculturalism and human rights. For the second half, I chose writers who I thought were especially insightful about how human rights work and do not work: Lore Segal, Gary Shteyngart, and especially Tony Kushner.

What did you have to learn about outside of your expertise in English?

To get at the philosophical complexity at work in the literature, I had to study up on the social history of the 1950s and 70s and read a lot of social and political theory. I co-taught a course with Wake Forest politics professor Michaelle Browers called “Multiculturalism in Political Theory and Literature,” and preparing for that course helped me build my knowledge base for the book.

Of those you researched, which author is your favorite and why?

Tony Kushner is my favorite, by far, for his ability to first expose all the fallacies and limitations at the core of our presumptions about human rights, and then to insist that we can and must find yet better ways to care for one another.