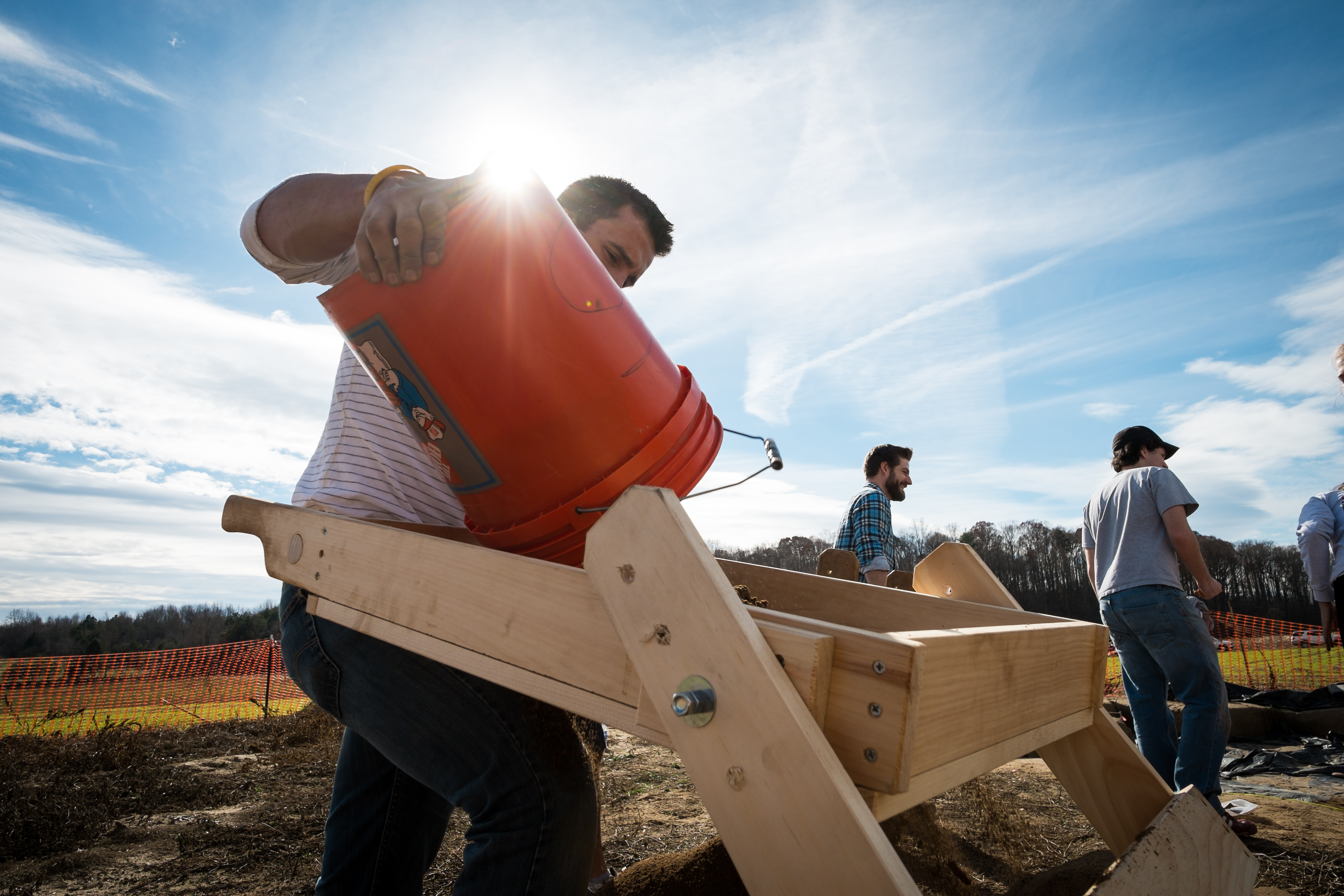 On a cold and windy Saturday morning, 12 students walked onto a tobacco field along the Yadkin River. Carrying shovels, screens and other equipment, they trekked towards a small sectioned off area in the middle of the field. Within an hour, they began finding artifacts more than 500 years old.

Excavations that started during the summer revealed the site was home to Native American families between the 11th and 16th centuries.

Peter Ellis, a senior anthropology major, has worked at the site since May with Eric Jones, assistant professor of anthropology. Funded by a summer research fellowship through the Undergraduate Research and Creative Activities Center (URECA), Ellis spent 10 weeks carefully removing soil and screening for artifacts.

Based on current evidence, Jones estimates the site contained only 12 to 25 people. Communities like this one made up rural America from 500 to 1000 years ago. Studying them can give a more complete picture of what life was like during this period in North Carolina’s history.

“We are interested in how smaller communities interacted with their environment and the other small and socially complex communities around them,” said Jones. “There is a debate about what settlements looked like during this time. We do not know if small sites arose as people seasonally aggregated in the winter and scattered in the summer or whether small and large communities existed year round and people chose which one to live in.”

This fall, Jones and Ellis shared what they had already learned with groups of anthropology students visiting the site for the first time.

“So far the evidence suggests that this site was a permanent settlement,” said Jones. “But we want to find another structure or more botanical remains that show the occupation was year round.” 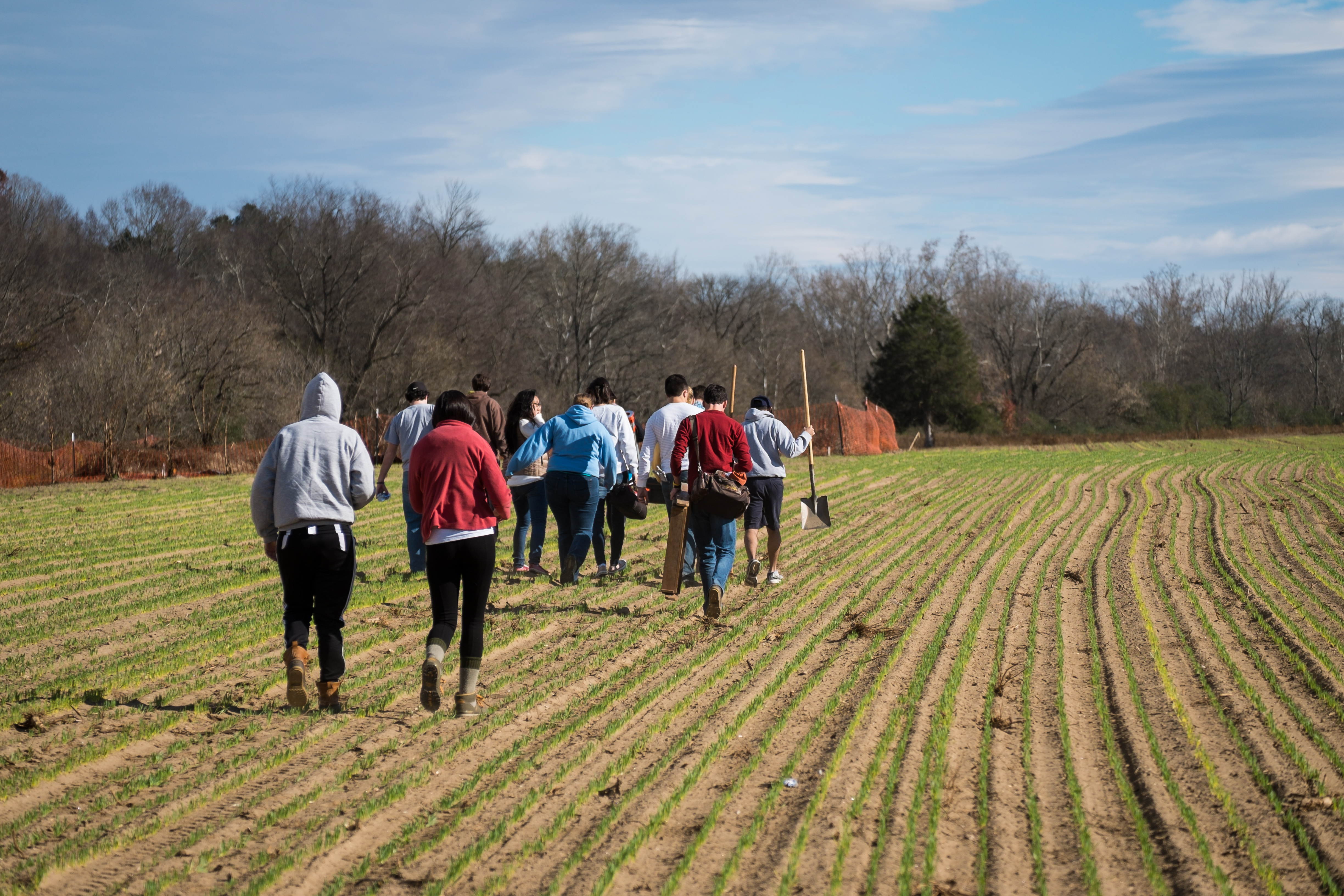 Many of the artifacts found at the site have been pieces of pottery, which can provide important information about the settlement. The raw materials used to make pottery can often be traced to a specific geographic location. Additionally, different groups had unique pottery styles, so studies of pottery sherds can give clues to how this group interacted or traded with other nearby groups.

Jones brought students in his North American Prehistory class to the site as a fun way of learning hands-on archaeology. “Information makes more sense when you are the one finding artifacts and working on answers,” said Leah Schenkel, a senior history major and anthropology minor. “Working at an archaeological site helps you learn the steps of archaeology from the recovery to the analysis to the interpretation.

As students discovered artifacts, Jones explained what the function of each may have been. Rocks that had been burned, termed “fire-cracked rocks,” were probably used in cooking. A small piece of quartz may have once been a part of a stone tool.

Each artifact the students found were bagged and labeled to bring back to The Anthropological Geographic Analysis Lab. In the lab, they will be washed and examined to determine their composition and identify any distinguishing features. These artifacts can also be used to determine what activities were carried out at the site and when the site was occupied.

“Working at the site I gained a larger perspective about the importance of carrying out field work,” said Ellis, who plans to attend graduate school in anthropology.  “It is one thing to read about the conclusions of other archaeologists, but an entirely different experience to be able to do this for myself. I enjoyed analyzing and drawing conclusions about archaeological evidence, whether it was the mess of post molds we had uncovered or the style of a projectile point we found.”

Jones plans to continue to work with students at this site. Earlier in the semester he brought his introductory archaeology class to the site and this summer he will teach students archaeological methods at an archaeology field school.

“I would love to continue doing research like this,” said Ellis, “despite managing to get caught in some very large and sudden storms and getting chased by a cow.”