Imagining the next ‘big idea’ 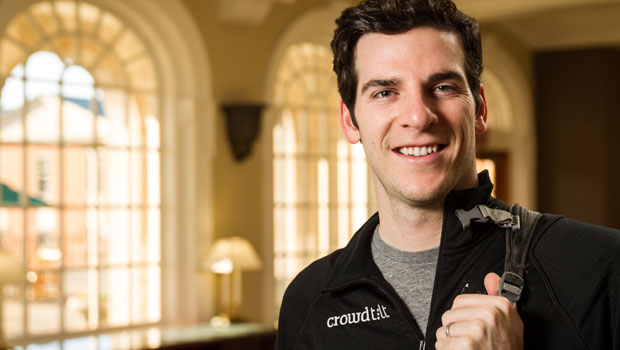 The dictionary defines an entrepreneur as a person who organizes and operates a business while taking on substantial risk. James Beshara, a 2008 Wake Forest graduate says he defines entrepreneurship as another word for fulfilling work.

Beshara, CEO and co-founder of the San Francisco-based company Crowdtilt, a social fundraising platform, recently visited Wake Forest for Global Entrepreneurship Week. “Since we launched Crowdtilt two years ago, our biggest success is that we keep getting to do what we love doing every day,” he said.

During his time on campus, Beshara shared the stage with Reddit co-founder Alexis Ohanian, had a breakfast discussion with student innovators, taught a class on entrepreneurship and met with faculty to share ideas about how to prepare students to launch start-ups after graduation.

Sophomore Austin Evers, president of Wake Forest’s Entrepreneurship Society, said Beshara’s visit was a phenomenal opportunity. “To have a young alumnus come back and talk to us about what it’s like to start a business was inspiring. James is not much older than we are, and though many of us have launched products or services in high school or at Wake Forest, it’s a different experience after graduation.”

Evers, founder of Appuous software and the 2013 winner of Wake Forest’s Excellence in Entrepreneurship Award for a Technical Venture, says he’s planning to continue to take advantage of the safety nets in place at Wake Forest to try new ideas — including those in the Center for Innovation, Creativity and Entrepreneurship. “If a new idea fails while you’re at Wake, there’s backup.”

While studying international development economics as a student, Beshara’s first venture was the Dvelo Fund, a company created to finance student trips to developing countries. Next he built on the concept of social collateral to create Dvelo.org, which aimed to provide group-funded loans to micro-insurance organizations.

If you’re a good entrepreneur, Beshara said, you’ll likely have more scars than trophies, and Dvelo brought its share of disappointments when months after launch the SEC shut down the company.

The best ideas are where humanity and technology intersect

In a basic entrepreneurship and business skills class, Beshara told students starting a new business is like “jumping off a ledge.” If you work hard and treat people right, success is more like gravity than anything else,” he said.

His advice: Don’t be afraid of failure.

“Starting a business is not about getting people excited about what interests you. It’s about finding out what interests others. When we build a tool that serves a need, people find new and unexpected uses for it. Crowdtilt is a simple idea. It’s the virtual version of  an envelope taped to a dorm room door where someone collects cash for a road trip or a party.”

With Crowdtilt, users launch campaigns and set goals for how much money they hope to raise. Once a campaign reaches a certain amount in money pledged,  it “tilts” and the funds are collected. The tilting feature creates excitement and social media sharing options help users spread the word. A campaign can run for a maximum of 30 days, and Crowdtilt collects fees only if a campaign succeeds.

Where does Beshara say the world is headed? The future is in digital participation. in the creation of the world around us. As markets and information continue to become more efficient, the lines between producer and consumer will become blurred, he said.  Knowing how to code and knowing the language of our devices will be critical no matter what field you enter.

“It was incredibly fulfilling to hear James talk about the importance of computer programming for entrepreneurs,” said senior business major Elizabeth Hudspeth, CEO and co-founder of 1834 Software. “It’s a global trend, and students need to learn these skills. It was a much-needed reminder of how important it is for students to be ‘technology literate.’”

“A more informed and connected global population will create a better world for everyone,” said Beshara. “We owe it to ourselves to appreciate and prepare for the unique time we live in.”