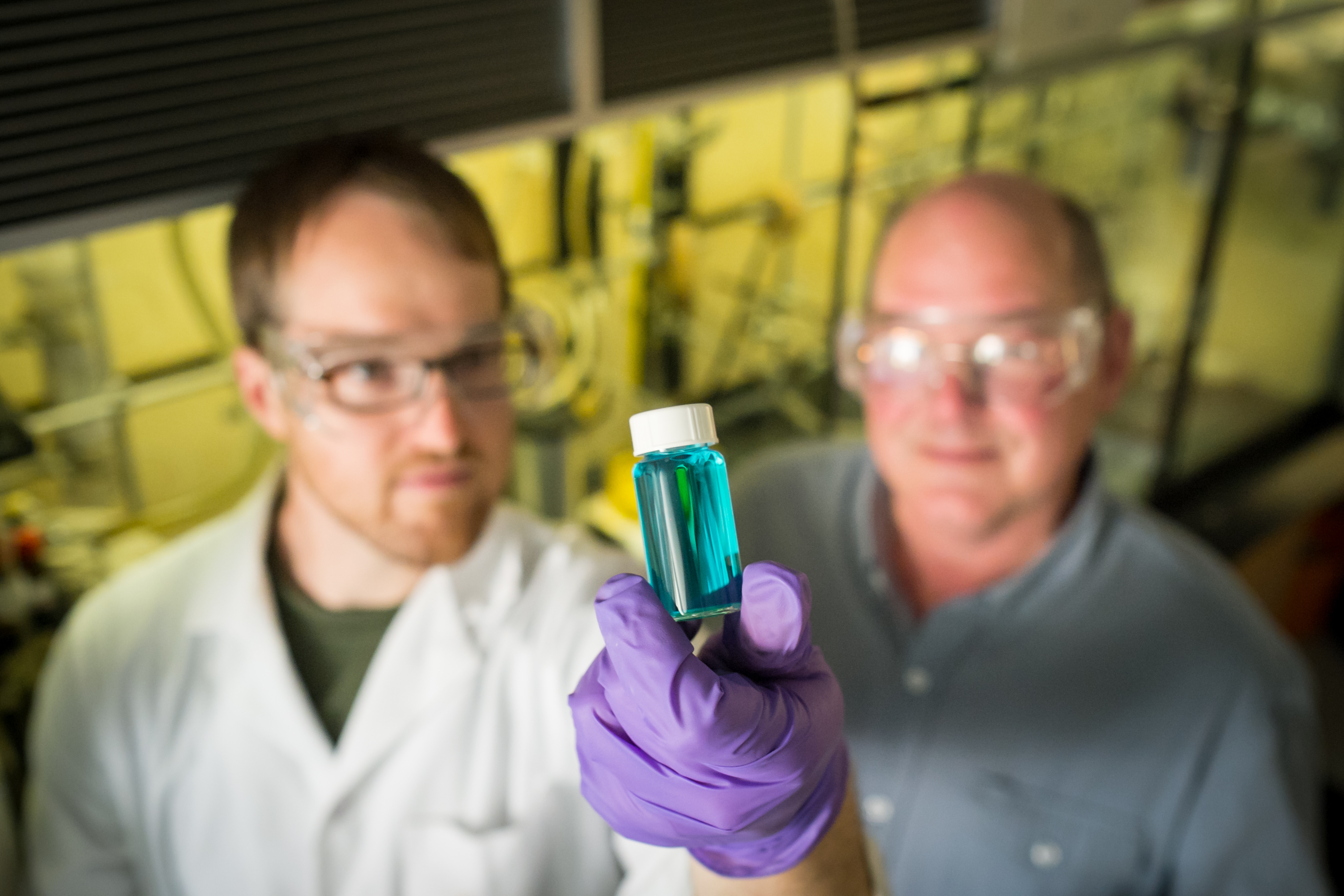 A new compound created by Wake Forest chemists could help scientists probe the secrets behind deadly forms of cancer, Alzheimer’s and heart disease.

Bruce King, a professor of chemistry and associate provost of research, and Thomas Poole, a Ph.D. candidate in chemistry, engineered the molecular tool to pinpoint exactly where cell damage is occurring as a result of the body burning too much oxygen.

It could one day help to determine if a person is at risk of developing a life-threatening disease. The results of their work appear in the current edition of the Journal of the American Chemical Society.

Too much oxygen is a bad thing

Oxidation is the process of burning in the body. In the right amounts, the body’s immune system uses oxidation to cause inflammation and fight off disease. Too much, however, can damage cells and DNA. This in turn can make the body more susceptible to illness.

King said one of the problems with identifying and fighting many chronic diseases is researchers currently do not have an effective way of figuring out what is causing oxidation to go wrong in the body.

With this in mind, King and Poole began exploring news ways to quickly and efficiently identify which proteins are telling cells to burn too much oxygen.

The bicyclononyne-based compound they developed seeks out and binds to sulfenic acids, chemicals exclusively produced by the proteins undergoing oxidation. It works up to 300 times faster than previous chemical means of detection, enabling researchers to identify the telltale signs of oxidation before they are gone.

“If you are looking for a tiny protein undergoing a split-second reaction in a whole sea of biology you have to have something that can find it fast,” Poole said. “Our molecule is capable of doing that.” 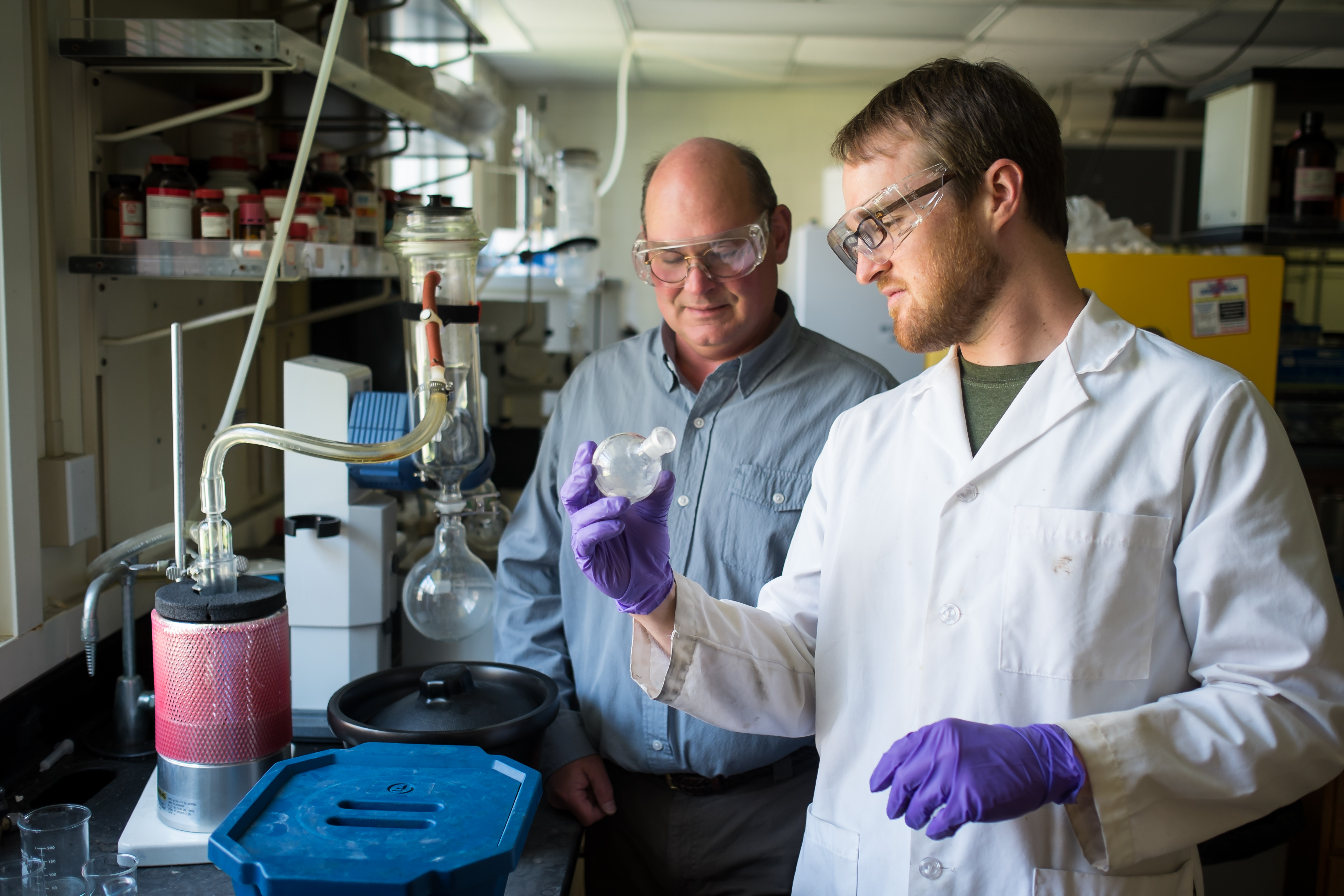 Bruce King, a professor of chemistry and associate provost of research, and Thomas Poole, a Ph.D. candidate in chemistry talk about their research in a lab in Salem Hall

Poole is the latest addition to a long line of Wake Forest chemists studying oxidation reactions and their effects on the human body. Leslie Poole (PhD ‘88), a professor in biochemistry at Wake Forest Baptist Medical Center and Cristina Furdui, an associate professor in molecular medicine are co-authors on the new paper.

“This work has really been a huge team effort and goes back several generations,” King said. “Tom is the latest addition to our tradition.”

Tom Poole said working with King has been one of the highlights of his career to date.

“Working with Dr. King has been a fantastic learning opportunity for me,” Poole said. “Unlike a lot of researchers, he doesn’t hand you the answers. Rather, he seeds you with an idea of something that might work then lets you go and figure it out for yourself.”

While the compound King and Poole developed is still in the early stages of development, Poole said he hopes to continue his work to make it faster and easier to use.

“At the most fundamental level, this research is really helping us understand how and when cells communicate with each other,” Poole said. “If we can understand the words cells use to communicate it will give us a clearer picture of what is causing something to go wrong.”