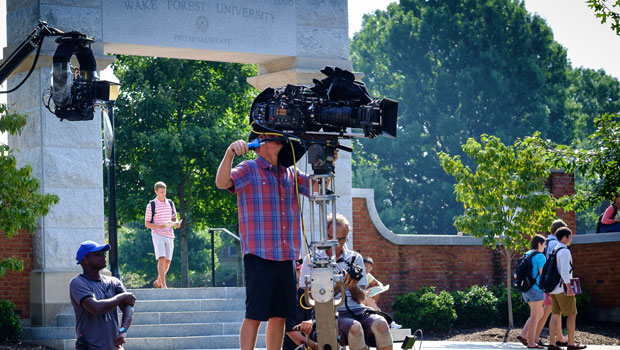 Crews with 20th Century Fox spent the day Monday on Wake Forest University’s Reynolda Campus filming scenes for an adaptation of Nicholas Sparks’ bestselling novel, “The Longest Ride,” to be released this spring.

In the movie, a young cowboy played by Scott Eastwood falls in love with a Wake Forest senior art student.

“Wake Forest has been the setting of a number of major motion pictures, including ‘Brian’s Song in 1971’ and ‘The 5th Quarter’ in 2010,” said Kevin Cox, Wake Forest’s director of communications and community relations who was the University’s liaison with 20th Century Fox. “We are pleased to have reached an agreement that would allow the crew to spend the day with us and showcase our beautiful campus on the big screen.”

Moviemakers worked on campus from dawn to dusk filming exterior and interior scenes — bringing with them large trucks, trailers, cameras and a 130-person crew. Much of the filming took place on or near Hearn Plaza and inside Scales Fine Arts Center (in a classroom as well as the hallway outside the Mainstage and Ring Theatres). Both Reynolda Road and University Parkway campus entrances were filmed.

Wake Foresters and community members were invited to be among the 75 extras used during filming.

“It was an interesting experience to be a Wake Forest student playing a Wake Forest student,” says senior Kristi Chan. “The most surreal scene for me was shooting in Scales. I’m a studio art major, like one of the movie’s main characters. When we shot in one of the Scales classrooms, I sat in the seat I usually sat in during class, and they gave us all pretend art history tests. I looked at the exam and realized I had previously taken almost the exact same exam my sophomore year. ‘Good,’ one of the crewmen said. ‘Then you shouldn’t have a problem passing.'”

Students, faculty and alumni are all excited to see the film in April.

“Having a small part in it is fun for us, and we’re all looking forward to seeing us in the picture,” Cox said during an interview with Time Warner Cable News.

In addition to filming on campus, bull-riding scenes were filmed at Lawrence Joel Veterans Memorial Coliseum, also owned by the University.