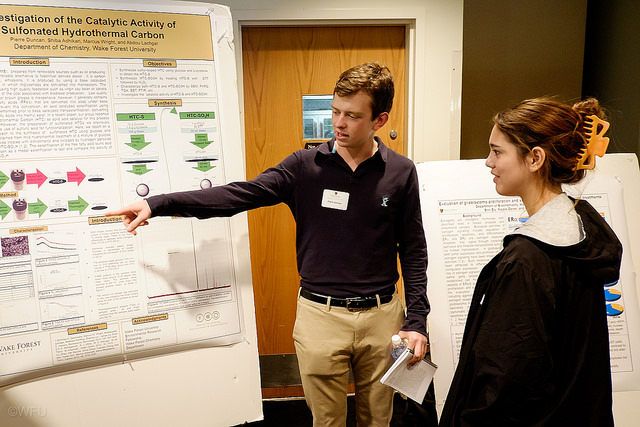 During his welcoming remarks for the 8th annual Undergraduate Research Day, Randall Rogan, co-interim dean of the college, told those gathered they would be impressed.

Research Day, held Friday, Oct. 24 in Benson University Center during Family Weekend, is a highlight of the academic year, showcasing the personal interaction and intellectual exchange between students and faculty.

Rogan described it as a “hallmark of who we are and what we’re all about.” 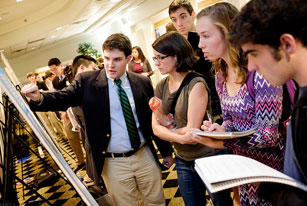 The event is sponsored by the Undergraduate Research and Creative Activities Center (URECA), which promotes and celebrates mentored scholarship.

Of this year’s participants, 23 (15.8 percent) were repeat presenters. This includes David Hale, a senior biology major who made his third presentation about the appetite of honeybees under the tutelage of Susan Fahrbach, Reynolds professor of developmental neuroscience and chair of the biology department.

Current juniors and sophomores, who began their projects as sophomores and freshmen, represented 48 percent of this year’s presenters. Over the past four years, 30 percent of participants have found a faculty mentor outside the department of their primary major – including those whose mentors are in the medical school. Mentors numbered more than 120.

Junior Caroline Livesay, a Spanish major from Greensboro, conducted a pilot study on how adults over age 50 acquire new languages – specifically how they acquire the language to which they have never been exposed in correlation with its written form, she said. Her mentor is William Hamilton, professor of German and Russian.

“This experience has been the highlight of my Wake Forest experience so far,” Livesay said. “Since I took Linguistics 150 with Dr. Billy Hamilton in the spring of my freshman year, I have been determined to go to graduate school for linguistics, and being able to do this research has only fueled my passion for this subject further.”

Sean Taylor, a senior from Edison, N.J., is a biology major who studied the effects of climate change and how they can alter coastal ecosystems. He was specifically interested in the exposure of plants to altered salinity levels, like the bald cypress which is common along the southeastern Atlantic coast and considered to be a foundational species in freshwater forested wetlands.

He found there is an overall negative response that is potentially detrimental to plant health with exposure to saltwater, indicating freshwater forested wetlands could be vulnerable to altered water chemistry associated with sea level rise. His advisor is William Smith, professor of biology.

The research experience has been an “essential aspect” of his science career path, he said.

Jackson Colvett, a sophomore from Johnson City, Tenn., worked with fellow sophomore Adam Hoxie to research the variables of parent-child communication and how that affects purchase decisions. “We found remarkable differences in the behaviors of children based on age and based on what sort of communication patterns the parents use,” Colvett said.

Colvett was new to academic research. “It was certainly a growing experience for me. I learned a lot about how to conduct research and how to write an academic research paper,” he said. “My faculty advisor, Dr. Marina Krcmar, has taught me a lot of research skills that I can use in future research. It was rewarding to see my work displayed and to see all of the other research that Wake undergraduates have done.”