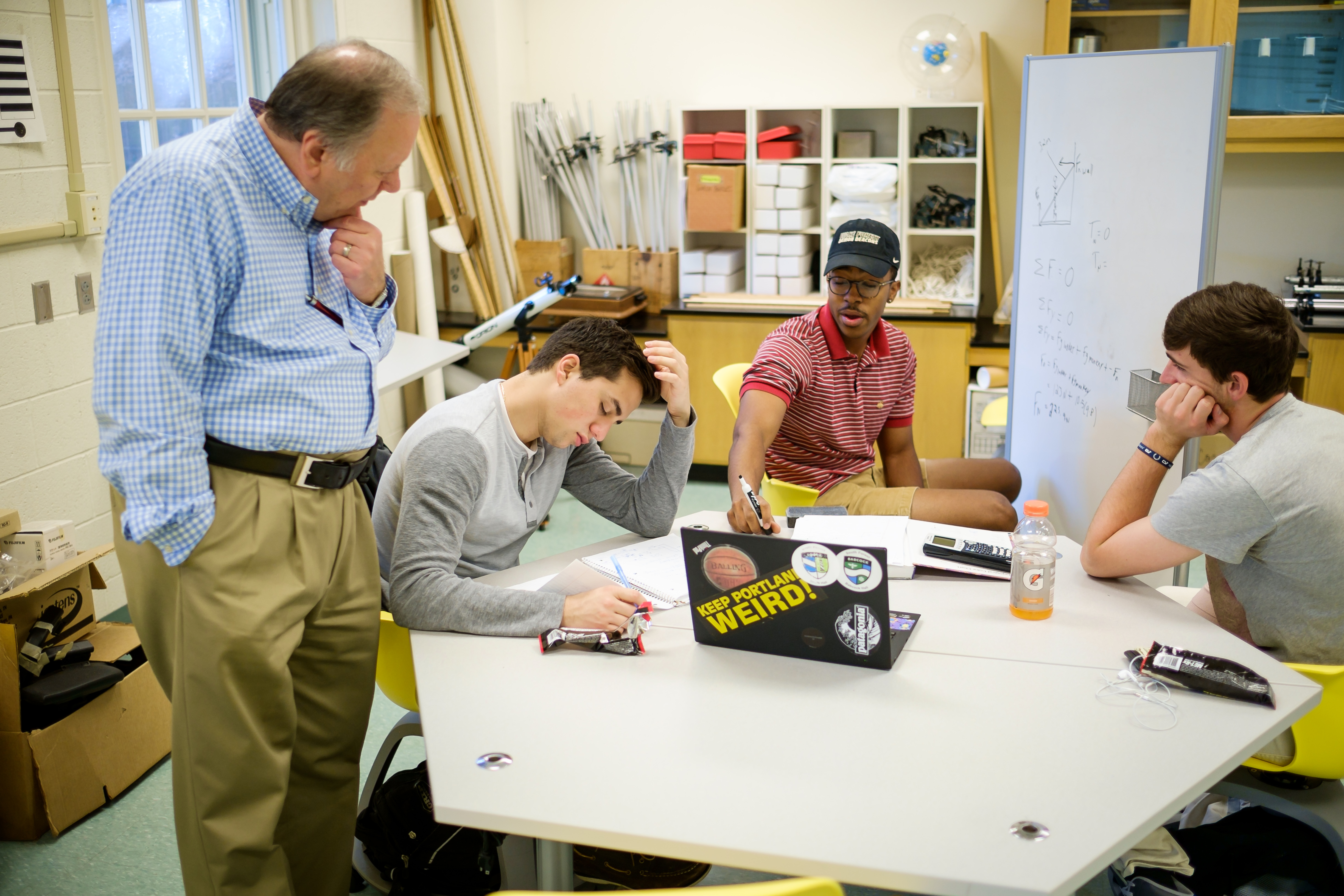 Professor Rick Matthews flipped out a little bit last semester when he returned to the classroom after seven years in an administrative role – but in a good way.

First-year students who signed up for his calculus-based introductory physics class found themselves in a “flipped” classroom that was designed to eliminate the traditional lecture and use class time in a more interactive way.

“I love lecturing, and I am pretty good at it, but I find that my students learn best when they are applying physics principles rather than just hearing me talk about them during class,” he said. “If we do more together in class – especially thinking – we can help each other with misunderstandings, students can learn more, and, as a nice bonus, class time will be more fun.”

So instead of lectures, furious note taking and typical homework assignments, class time was used for team-based problem solving, lab exercises and experiments, and more active teaching and interaction. Matthews was able to consult and instruct where needed to ensure that students understood concepts and problems.

Students watched lectures of Matthews and other department faculty explaining physics principles – captured on video – outside of class. The videos give students a second take on complex topics that they are “better able to understand with a five-minute video they can pause and rewind than live with me in 25 minutes,” Matthews explained.

If students were confused or had misconceptions, Matthews could provide a directed, topic-specific mini-lecture, students could offer solutions from their teams, or online resources could be used in real-time to present the basic material needed to help solve the problem.

For Tanner Owen and Laura Jennings, who both took regular lecture-style physics classes in high school, the flipped format made all the difference in what they learned.

“The whole system allowed me to really garner a better understanding of physics. I couldn’t do an F equals MA problem in high school but now I can do it without any thought really because of how much Professor Matthews helped us in class,” Owen said. “If you learn the principle in class and then go home and can’t do the problems, you haven’t learned anything.”

Anecdotally, students are reporting that they believe they are learning more, said Matthews, and midterm and final exam scores were better than he’d seen in years past. “There’s so much to cover in physics, and you can’t leave anything out because everything is a building block for the next thing,” he said.

For Jennings, having time in class to figure out the concepts with help from classmates and the professor reduced frustration and anxiety. She and Owen agreed that while the experience was rigorous, they learned more.

“I need to be able to talk through the problems, and sometimes you don’t really understand them unless you can do that,” said Jennings. “Coming to class with questions and doing problems together so you can actually figure it out with the teacher is completely opposite from how I learned before (in high school),” she said.

Also known as backwards classes or reverse teaching, the concept itself isn’t new. Examples can be found across a variety of disciplines as poor learning outcomes nationally have pushed educators at all levels to change the traditional one-size-fits-all model that has teachers lecturing in front of the class and sending students home with their assignments to apply what they hopefully learned.

The physics department has wanted to implement the flipped model for a while, said Keith Bonin, professor and chair of physics, but “we did not have a space properly configured for this kind of class.”

This type of classroom format requires a highly mobile, integrated class with lab components mixed with multimedia sources, mobile whiteboards, projectors and smartboards, he added. Amphitheater-style seating with chairs bolted to the floor is not conducive to students interacting with each other and the professor. The only group meeting space in Olin Hall with flat floors are the labs, but they needed to be able to quickly convert between one configuration and another.

“In the end, we settled on completely overhauling the lab room,” Bonin said.

Faculty in the department have been successful in winning significant research grants, and the department receives a portion of these funds. The department saw improving instructional space as its greatest need, he said, and dedicated these funds to converting a lab room to better support student learning.

The future of flipping

Spring semester has Matthews continuing with section two of the introductory physics class.

“We have been discussing ways to improve the course the second time around next fall,” Bonin said, “and there are some changes that could even possibly be tried this spring in the second semester of this one-year course.”

Additionally, fellow physics professor Fred Salsbury will use the same space to try some innovative methods to help his students master the material in two majors’ classes: Classical Mechanics and Statistical Physics.

“Lots of our faculty would love to do this if we just had the space,” Matthews said. “I’m so blessed to be the guinea pig. I’ve got the whole department cheering for me.”

Bonin said he and the rest of the faculty continue to be excited about experimenting with the new space format. “Rick did a great job during the kick-off semester, using existing videos that the physics department already had online, editing them and converting them to a better format, so that students could have a short pre-lecture on the main topics before showing up for each class,” he said. “In the end, every student but one thought that this style of class ought to be adopted by the other professors, and even the one student thought it would work, but with relatively easy changes.”

Owen, one of the students in Matthews’ first flipped class, said he could easily see other science courses flipping as well. For students, “the power of talking problems out is incredible,” he said. “In physics, problem solving is huge and as a class we got really good at that, and I would definitely attribute that to this format.”

Nuts and bolts of classroom flipping

After seven years as the University’s chief information officer, physics professor Rick Matthews returned to physics half of the time while also serving in a new role for the College as director of academic and instructional technology to integrate technology into the pedagogical efforts of the University.

“It was the perfect time to capitalize on Matthew’s talents and take advantage of this opportunity in a new and exciting way, said professor and chair of physics Keith Bonin. “Rick was a popular professor, well-known for his teaching skills and for the effort he put into his teaching, so I also wanted to really make the best use of his love of teaching, his love for trying new approaches and his love of technology.”

After brainstorming with Matthews and Eric Chapman, the instructional resources manager of the physics department, about unique ways to exploit this opportunity for maximum impact, they decided to experiment with flipping the introductory physics course. But the trio needed to figure out how to transform an existing teaching laboratory room (Olin 105) to be able to sustain both a flipped class format as well as a traditional laboratory format.

The answer is a highly mobile, integrated class with lab components mixed with multimedia sources. Traditional lab components were switched out for mobile and foldable chairs, tables and whiteboards.

Last fall, Provost Rogan Kersh provided funding to cover a portion of the expenses for this innovative teaching space which includes a final improvement which should be completed early this spring semester – to replace the solid sheet steel doors with mostly glass doors to pique curiosity in passing students, faculty and visitors, said Bonin.

“We are very grateful for this support and for the continued support of both the provost and of the deans of the college,” Bonin said. “The innovative space created for the flipped class is not yet complete, and we are hopeful that it can be completed in the near future with the help of donations from our generous alumni through the Wake Will Campaign.”