(Winston-Salem, N.C. – April 22, 2015) – New research from a Wake Forest University biologist who studies animal behavior suggests that evolution is hard at work when it comes to the acrobatic courtship dances of a tropical bird species.

Assistant professor of biology Matthew Fuxjager studies the physiological basis of bird behavior, with a particular emphasis on how hormones control complex social behavior. For his latest study, published April 13 in the journal Functional Ecology,

he investigated how the ability to detect testosterone in the body regulates the acrobatic courtship and competitive behavior, or bird brawn, of male golden-collared manakins.

“Our results provide the first evidence that androgenic sensitivity in select parts of the neuro-motor system is an evolved mechanism to facilitate performance abilities and acrobatics in physically elaborate socio-sexual displays,” Fuxjager said. 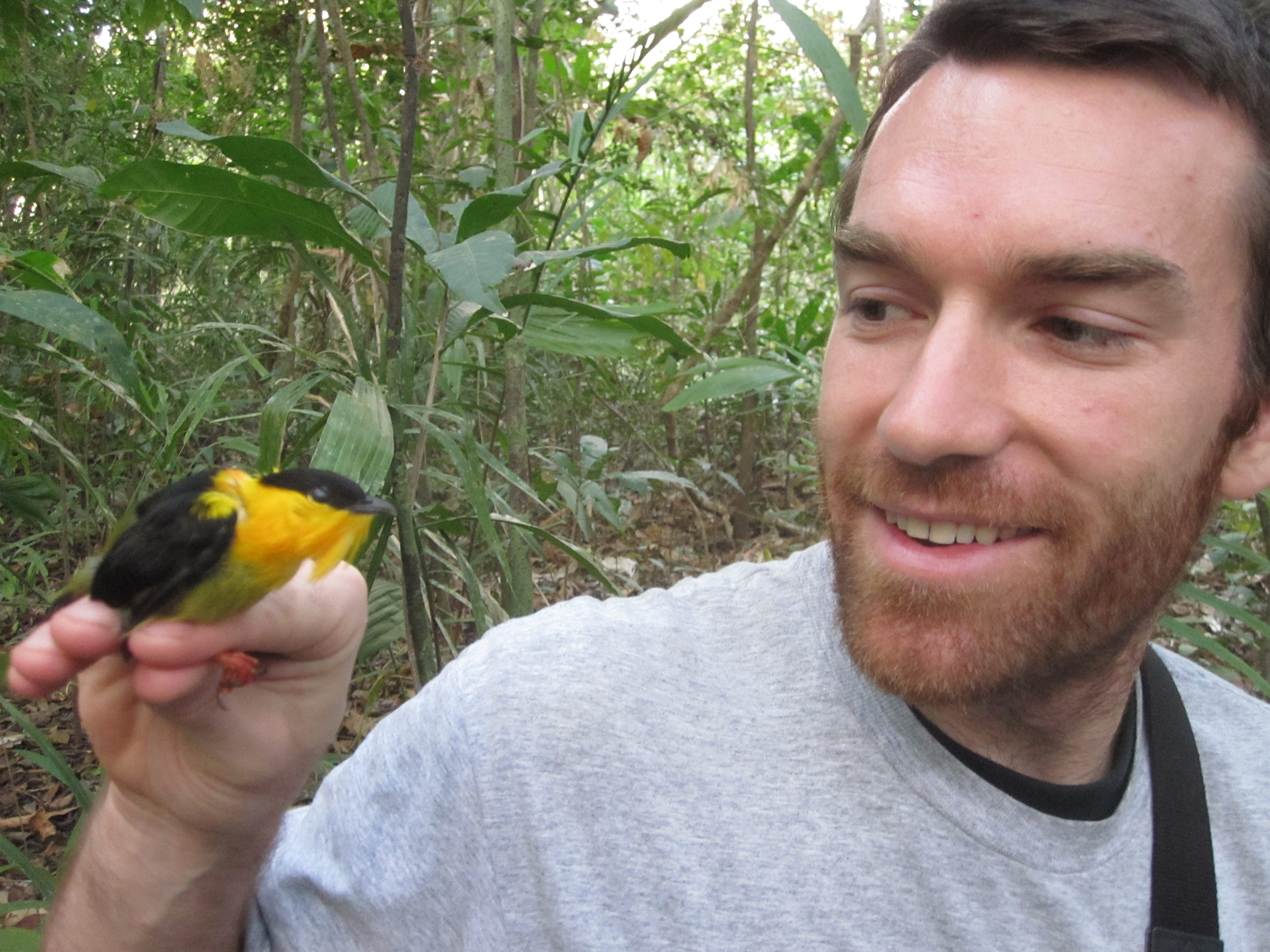 There are about 60 different species of manakins, most of which perform, to some degree, a physically complex display behavior to both court females and to compete with other males, he said.

The researchers hypothesized that evolution acts to help shape the mating display behavior by controlling androgen sensitivity in the avian wing muscles. They measured androgen receptor (AR) levels in these tissues in multiple species of manakins that varied in terms of the physical complexity of their display to see whether this measure of androgen sensitivity corresponds to species differences in physical complexity of the display.

What they found is that those birds with more complex displays had muscles more sensitive to testosterone. “This research has some interesting implications for how evolution exploits testosterone’s ability to influence muscle and natural forms of athleticism,” Fuxjager said. “Our current data support the hypothesis that sexual selection shapes levels of androgen receptors expressed in the forelimb skeletal muscles to help drive the evolution of adaptive motor abilities.”

Fuxjager said elaborate physical displays are found in most species, but little is known about how physically complex movements are linked to sexual reproductive behavior or fighting. He plans to continue to study how testosterone sensitivity and other aspects of the genetics of muscle physiology have evolved across species to develop these behaviors.

Fuxjager discussed his research last fall on SciWorks Radio, a production of 88.5 WFDD and SciWorks science education center. Listen to the interview here. This study was a continuation of work done with a University of California research team he worked with as a post-doctoral student. National Institutes of Health Training Grant T32 HD007228 awarded to the Laboratory of Neuroendocrinology at UCLA and National Science Foundation Grants IOS-0646459 and IOS-1122180 supported this work.