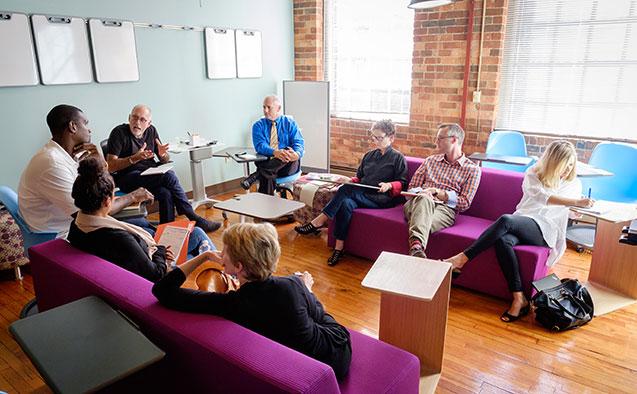 Editor’s Note: The sports, race and society class described below is being taught by Emmy award-winning director and producer Peter Gilbert. Due to scheduling conflicts, Chris Webber has been assisting with developing internships for students in the sports storytelling graduate program.

The Wake Forest University Graduate School of Arts and Sciences is bringing all-star power to its new Master of Arts (MA) in Sports Storytelling when classes begin in fall 2016.

Chris Webber, five-time NBA all-star, sports analyst, businessman and film producer has been named a Professor of Practice for the two-year program housed within the University’s award-winning Documentary Film Program (DFP). Webber will teach a course on sports, race and society.

“If we’re going to understand ourselves as a society, we have to understand sports, its culture and how it affects us every day,” said Peter Gilbert, a DFP professor and Emmy award-winning director and producer whose Oscar-nominated documentary, “Hoop Dreams,” won every major critics prize and journalism award in 1995. “Sports storytelling students will graduate with the expertise to tell the stories behind the stories of the 24/7 news cycle — the ones that fuel conversations.”

When the idea for a master’s degree in sports storytelling was proposed, Gilbert immediately knew he wanted to draft Chris Webber for its faculty line-up.

“I’m excited to bring real-life experience to the program. Sports are my passion and telling stories about sports is my new career,” said Webber. “I’ve been involved with the NBA for nearly 25 years, and I understand firsthand how sports, business, race, gender and economics mesh. Sports storytelling gives us a platform to explore these issues in an academic setting. I’m looking forward to not only sharing my own experiences, but learning from students how sports has had an impact on their own lives.”

Gilbert first met Webber while filming “Hoop Dreams” when Webber was just a teenager. In 2012, they launched Webber Gilbert Media Group, a multimedia production company that produces feature films and documentaries focusing on the intersection of sports, culture and society.

Chris Webber’s two seasons as part of the fabled “Fab Five” at the University of Michigan in the early 90s, and his 15 years as a power forward in the NBA, laid the foundation for his current success as a broadcaster, businessman, philanthropist and steward of African-American culture. He has earned the distinction of being a “thinking fan’s player-analyst” for his work on NBA-TV’s “NBA Gametime Live” since its launch in October 2008. Webber is a game analyst and color commentator for Turner Sports.

“There are programs in sports journalism and sports marketing and sports media production, but Wake Forest’s storytelling program will focus on the academic connections between sports and culture. Several Wake Forest communications professors including Ron Von Burg and John Llewellyn are committed to working with the DFP to create a program with challenging coursework that will prepare graduates for careers from long-form documentary film creation to storytelling across multiple platforms such as short films, mobile apps and websites,” said Jones. “We are excited to offer a program that provides a way to look deeply at and truly engage in the societal issues surrounding all sports for all age groups.”

The DFP team plans to use its new space in downtown Winston-Salem’s historic Brookstown area to host events that will bring the University and the community together — inviting influential speakers to discuss issues of class, culture and race. Webber will moderate many of these discussions.

For more information on the MA in Sports Storytelling and to apply, visit the Documentary Film Program website at www.wfu.edu/documentary. The application deadline is Jan. 15, 2016, with rolling admissions thereafter.