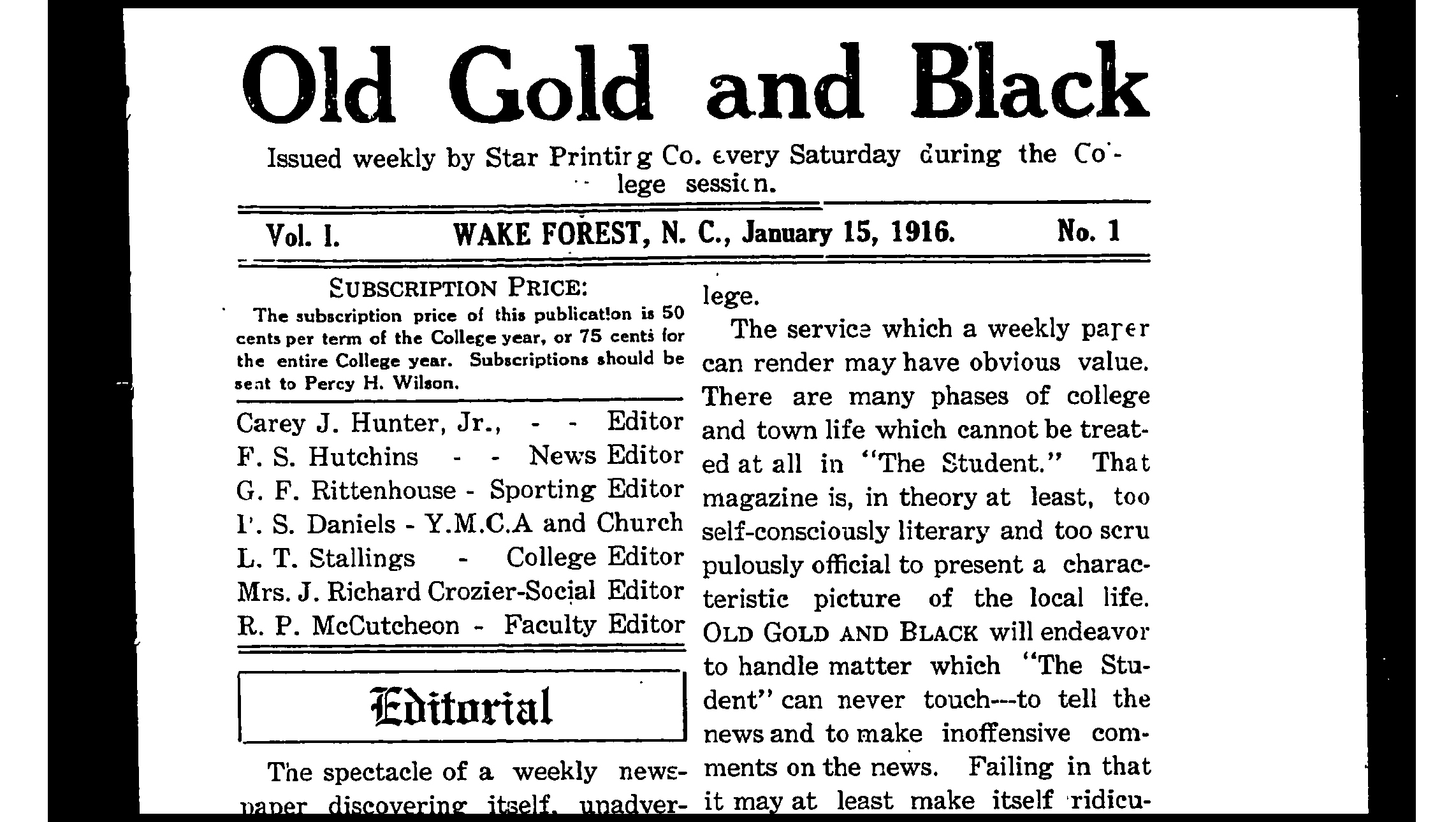 The new editor-in-chief, sophomore McKenzie Maddox, said, “It is both an honor and a privilege to have the opportunity to celebrate the 100th year anniversary of the Old Gold & Black which has been an integral part of campus life for so many generations of students.”

The original subscription price was 50 cents per term or 75 cents for the entire year. The first editorial assured its readership and the public that they “need feel no alarm. We are planning no revolution to disturb the tranquility or the social order of the locality. Our policy is orthodox and harmless, or would be, if we had one at all. This is not even a yellow journal, although the name with which it has been christened (immersed, of course,) Old Gold and Black, has a yellow streak in it.”

The award-winning paper was responsible for one of the most indelible contributions to the campus culture and Wake Forest history – naming the mascot the Demon Deacon. As history tells it, in 1923 the football team defeated rival Duke University and in the following issue of the paper, sports editor Mayon Parker (’24) first referred to the team as the Demon Deacons in recognition of what he called their “devilish” play and fighting spirit. It stuck.

Over the years, the OGB naturally became a training ground for student journalists to cut their teeth. Justin Catanoso, OGB adviser since 2010 and director of the journalism program, said the paper is a “critical complement to journalism education.”

“The Old Gold & Black has been an essential part of campus life for a century, shining a light on triumphs and problems always alike with the intention of helping make Wake Forest a better place for all. Here’s to the second century,” he added.

Here are a few of the many notable journalists associated with OGB:

Mike Riley (’81), CEO and editor in chief at The Chronicle of Higher Education and The Chronicle of Philanthropy, is one of the many who launched successful journalism careers following their time on the OGB.

“I can’t imagine Wake Forest without the Old Gold & Black. It gave me my first real journalism experience, throwing me into the deep end of reporting, writing, editing, opining, arguing, laughing, learning, and living,” Riley said. “My senior year as editor cratered my academics, but it taught me more than I could ever have imagined. And it put me on the road to a career in journalism, which has been one of the best choices I ever could have made.”

OGB staff hope to pay homage to the 100-year milestone throughout the semester while also launching a new website and increased social media presence. Maddox and her team are determined to show the student newspaper’s relevance and importance to campus life.

“While this special year adds an extra pressure to be successful, I am confident that the OGB staff and I will continue the tradition of keeping students informed about the events, climate and issues happening on campus as well as giving students a medium to voice topics and concerns that are important to them,” Maddox said.