The Pro Humanitate spirit is alive and well in Lins Barwick, as well as the friends and family lining the corridors of a nearby hospital, where he is recovering from injuries sustained during an off-campus shooting on June 11.

Support for Lins and his family has taken many different forms, including a social media fundraising campaign organized by his Kappa Alpha (KA) fraternity brothers.

“We wanted to do something immediate that stood out to get support and show Lins he’s got the whole Wake Forest community behind him,” said Brandon Sweeney.

In less than 48 hours, a t-shirt designed by friends to raise awareness and show support had pledges of almost $10,000. As another way to show support for Lins, his friends and alumni have also donated to a cause close to his heart. They have contributed thousands to support a young girl with cerebral palsy Lins befriended while on a pre-medical internship in Ghana earlier this year. The girl, who has other debilitating health issues, was left for dead and has lived her life in a hospital. (See below for more details.) 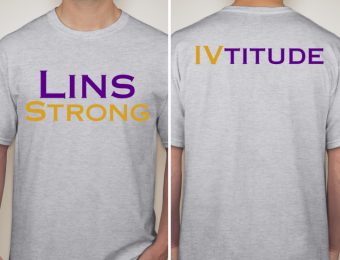 The t-shirt Sweeney and other friends from Wake Forest designed plays off Lins’ name – Plato Collins Barwick IV. The front reads “Lins Strong” – as in Boston Strong. The back uses Roman numerals to spell “IVtitude” – fortitude, defined as the “mental strength and courage that allows someone to face danger, pain.”

“That word just seemed to fit because he’s shown a lot of fortitude and courage,” Sweeney said. “That just shows how much he’s liked and respected. He’s everyone’s best friend.”

For the KA brothers, what happened to Lins served as a reminder that even familiar places in generally safe communities are not immune to violence. “We don’t think about things like this happening,” said Banks Wall.

Friends and family say Lins had walked some female friends home when the robbery happened. After police and EMS came and Lins was on his way to the medical center for emergency surgery, Waddell used a messaging app to get the word out about what happened.

Brawley Crawford was with friends at a concert in Charlotte when he got the message. They headed straight to the medical center upon their return to town.

“When we showed up, people were filling the hallway. It was just a wave of the Wake Forest community already there to support him,” Crawford said.

Lins’ condition continues to improve, though he has a long road ahead of him. He has undergone a second surgery and has been moved to a private room, according to his father, Collins Barwick. He said the next 10 days of the recovery process are crucial.

“To say it’s been overwhelming would be an understatement,” Barwick said, “but the support of the Wake Forest community has been absolutely incredible and the students have been incredible.”

An angel for Angel

What Sweeney, Waddell and the others find incredible is Lins’ attitude.

Even from his hospital bed, he’s been more concerned about others, said Jake Lesnik. “I saw that he was sharing his GoFundMe page for Angel while he’s been in the hospital.” 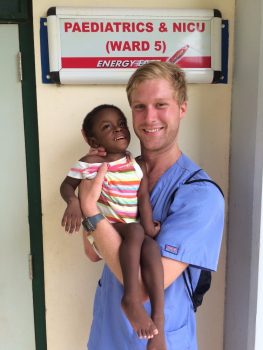 Angel is an orphan in Ghana who Lins met last semester when he traveled there for a premedical internship at Cape Coast Teaching Hospital. Angel’s story is heartbreaking and made Lins want to do more.

On a GoFundMe page he set up for Angel in March, Lins wrote: “I feel particularly connected to this little girl because I have worked alongside children with disabilities back home in the United States for more than five years and I have been able to recognize that her ability to thrive to the best of her ability has not been met.”

To date, he has raised more than $11,000 for her care. Thanks to Lins’ efforts and generous supporters, Angel has been accepted into an orphanage, received custom-fitted hearing aids so she could hear for the first time in her life and also received some much-needed physical therapy equipment.

What he’s trying to do for one little girl so far away just speaks to who Lins is, said his friends. “He’s always reaching out, always branching out to make friends, always caring,” pointed out Justin Chermol.

While the money raised by the t-shirt campaign is earmarked for the Barwick family to help with medical expenses, Sweeney expects Lins will want most of it to go to Angel to help meet her needs.

“He’s very adamant about coming back to school.” Sweeney said Lins even talked about attending the second summer session if he could. “That just shows how much he cares about being here – how strong he is as a person.”