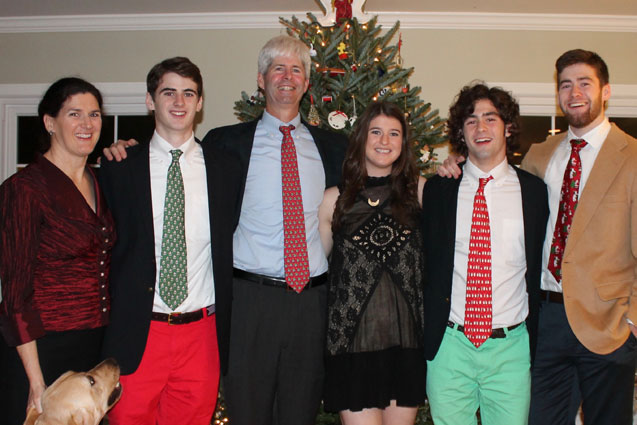 Wake Forest junior Katie Krivda and her family will be cheering on the Demon Deacons at the Military Bowl presented by Northrop Grumman on Tues., Dec. 27, in Annapolis, Md.

All six members of the family (including two sets of twins) are either retired military, in military service or preparing to serve in the military.

Katie, a biology major and ROTC cadet, has a twin brother, Cadet Joe Krivda, at Notre Dame University. The family’s second set of twins, Kevin and Dennis Krivda, will be starting college in fall 2017 as recipients of ROTC scholarships.

Katie has been a Red Cross volunteer since the eighth grade and has volunteered at Walter Reed National Military Medical Center. She plans to take the Medical College Admissions Test this summer.

“I have always been interested in medicine and in the military,” says Katie. “Growing up around so many people that I looked up to, it was very natural for me to want to care for others in service to my country.”

Colonel Stephen Krivda, Katie’s father, is a dermatologist and was an officer in the U.S. Army for 27 years with assignments worldwide, including chief of the dermatology service at Walter Reed National Military Medical Center and the National Naval Medical Center at Bethesda. He was also the chief dermatology consultant to the White House Medical Unit and U.S. Congress.

Lieutenant Colonel Mary Krivda, Katie’s mother, has been an Army attorney for 28 years.  Currently assigned in Washington, DC, she has also served worldwide as a prosecutor, military personnel law and claims attorney, and Judge Advocate recruiter.

As honorary guests of Wake Forest University, the Krivda’s will ride on The Streakin’ Deacon tour bus in the Military Bowl Parade, a game day tradition that begins at 10:30 a.m. at City Dock in downtown Annapolis and proceeds to Navy-Marine Corps Memorial Stadium. They will also attend the Military Bowl Official Tailgate.

Katie and her family, who live in Kensington, Md., are available for interviews prior to and the day of the Military Bowl game.

About the Military Bowl
The Military Bowl presented by Northrop Grumman at Navy-Marine Corps Memorial Stadium, features a matchup between the Atlantic Coast Conference and the American Athletic Conference. Organized by the DC Bowl Committee, the Military Bowl serves as a premier regional event benefiting the USO and other organizations supporting members of the Armed Forces and their families. Since its inception in 2008, the Bowl has donated more than $600,000 to the USO and provided more than 25,000 complimentary tickets for troops and their families.