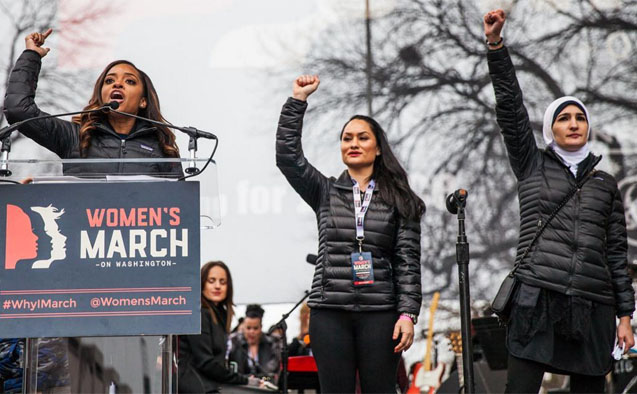 Wake Forest University will feature the three national co-chairs of the recent Women’s March in Washington, D.C., as the keynote event for the University’s Black History Month activities. The moderated discussion, “Reckoning & Resistance,” will take place at 7 p.m. Thursday, Feb. 16, in Wait Chapel.

In their first public appearance since the march, the co-chairs – Tamika Mallory, Linda Sarsour and Carmen Perez — will take part in a discussion about their involvement in the National Women’s March on Washington and steps moving forward in the movement. The discussion will be moderated by Maya Angelou Presidential Chair Melissa Harris-Perry.

The event will be livestreamed at https://livestream.com/wfu/marchpanel.

Mallory, Sarsour and Perez have many years of experience organizing national efforts for civil and women’s rights, community policing and other issues. Sarsour is the executive director of the Arab American Association of New York; Perez leads the Gathering for Justice Movement; and Mallory is a long time civil rights activist, gun control advocate and consultant. Hundreds of thousands of women gathered in Washington, D.C. for the Women’s March on Jan. 21 under their leadership. The Women’s March brought together 4.2 million people in events across the country and has been described as the largest demonstration in the history of the United States. Sixty Wake Forest University students, including Wake the Vote and Elle.com Scholars, traveled to Washington D.C. to witness the event. These efforts were organized by the Pro Humanitate Institute, Anna Julia Cooper Center, and Women’s Center.

“I had the distinct honor of interviewing Linda, Carmen, and Tamika individually in the years before they combined forces to organize the largest protest in American history,” said Melissa Harris-Perry, who also spoke at the Women’s March. “Each is a respected and effective organizer in her own right. Together they are an unparalleled force. By welcoming these three women of color to Wait Chapel, Wake Forest University is setting the stage for American political history. I am thrilled to be a part of it.”

The event is free and open to the public, but tickets are required. Tickets can be reserved at wfu.eventbrite.com.

The event is co-sponsored by the Office of the Provost, the Black History Month Committee, the Pro Humanitate Institute, Intercultural Center, Student Union, Office of Diversity and Inclusion, Office of Personal and Career Development, Department of Communication, Black Student Alliance and Women’s Center.