Muhammad Yunus, an economist who won the 2006 Nobel Peace Prize for founding the global microfinance movement, will discuss his life’s work and his vision for “A World of Zero Poverty” at Wake Forest University on Dec. 6. 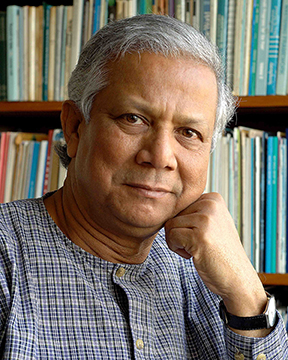 Yunus will give the inaugural Noesis Lecture at 4 p.m. in Wait Chapel. The event is free and open to the public.

Often called the “banker of the poor” and the father of social business, Yunus founded Grameen Bank as a non-profit in Bangladesh to provide small, collateral-free loans to the poor, mostly women, to start their own businesses. The bank became a model for combatting poverty through microlending.

“We are incredibly excited to launch the Noesis Lecture Series by bringing a Nobel laureate like Professor Yunus to Wake Forest,” said Adam Hyde, Assistant Director of the Eudaimonia Institute.

“His inspirational work continues to have a tremendous impact by reducing poverty and empowering women across the globe.” Adam Hyde, Assistant Director of the Eudaimonia Institute

For his constant innovation and enterprise, Fortune Magazine named Yunus as “one of 12 greatest entrepreneurs of our time.” He has also received the Presidential Medal of Freedom and the Congressional Gold Medal. In 2006, Yunus and Grameen Bank were jointly awarded the Nobel Peace Prize.

In his acceptance speech, Yunus said “Peace is inextricably linked to poverty. Poverty is a threat to peace.”

Yunus studied economics at Vanderbilt University as a Fulbright Scholar and received his PhD in economics in 1969. Returning to Bangladesh in 1972, he joined the University of Chittagong as head of the economics department. In 1976 Yunus started to experiment with providing microloans to the poor. Grameen Bank now has over 8.4 million borrowers, 97% of whom are women, and disburses over one and a half billion U.S. dollars each year.

Yunus is the author of the 2017 book “A World of Three Zeros: The New Economics of Zero Poverty, Zero Unemployment and Zero Net Carbon Emissions” and other books, including “Banker to the Poor: Microlending and the Battle against World Poverty” and “Creating a World without Poverty: Social Business and the Future of Capitalism.”

Yunus is also a founding board member of Grameen America, a microfinance nonprofit organization that provides loans, savings programs, credit establishment and other financial services to entrepreneurs living below the poverty line in the United States. He is a founding board member of Grameen Foundation, which works to reduce poverty in Sub-Saharan Africa, Asia, the Arab world and the Americas.

Yunus has served on the International Advisory Group for the Fourth World Conference on Women, the Global Commission of Women’s Health, the Advisory Council for Sustainable Economic Development. and the U.N. Expert Group on Women and Finance.