Expert available on the U.S. role in the Holocaust 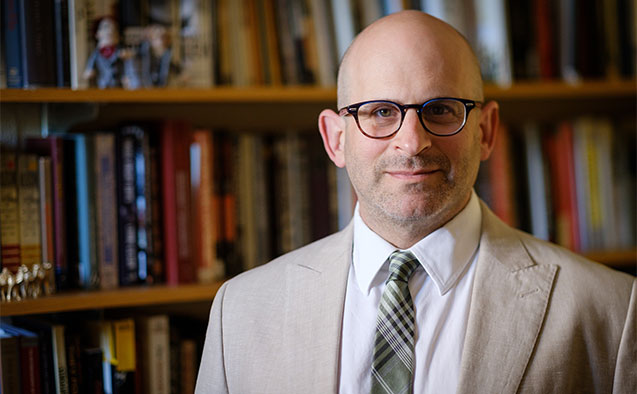 Barry Trachtenberg, Wake Forest Rubin Presidential Chair of Jewish History and author of “The United States and the Nazi Holocaust” is available to comment on the Holocaust, its lasting effects, and how it is taught and talked about in America.

Holocaust Remembrance Day on April 12 commemorates the Warsaw Ghetto uprising when Jews in 1943 resisted the effort to deport the remaining population to their deaths.

Trachtenberg can speak to racism toward American Jews as well as other minorities in the United States both in the past and today.

“Hatred intersects in ways that aren't always apparent. Remembering the Holocaust is both about honoring the millions of lives lost and the survivors. It is also about understanding the relationship between wars and targeting civilians.” Barry Trachtenberg, Wake Forest Rubin Presidential Chair of Jewish History

“The call of ‘never again’ continues to ring true in the face of today’s continued racism and attempts at division among Americans and others around the globe,” says Trachtenberg. Genocide did not start or end with the murder of European Jews. People need to be mindful of the rhetoric of war and remember that human life is not dispensable. We must always recognize our own capacity for violence and our own complicity with violence.”

Trachtenberg will speak on “Rethinking Liberation: Holocaust Survivors and Self-determination” and lead a discussion at the Yom HaShoah Remembrance event April 11 at 7 p.m. at Temple Emanuel in Winston-Salem.

In his new book, “The United States and the Nazi Holocaust: Race, Refuge, and Remembrance,” (Bloomsbury Press 2018) Trachtenberg covers the relationship of the Holocaust and the United States from the rise of Nazism in Germany in the early 1930s to the present-day. He discusses the U.S. response to the Nazi threat, the attempts by Jews to find refuge in the U.S., and the Holocaust’s aftermath.

“In the 1930s, German Jews hoping to find refuge from Nazism in the U.S. often found that strict immigration policies prevented them from obtaining the visas that were necessary to enter the country,” Trachtenberg writes. “This visa system was enacted a decade earlier by Congress in order to preserve the racial dominance of white Americans. Following the Depression, the quotas were restricted even further, as a fear of foreigners from any country foreclosed the possibility of migrating to the U.S., even to escape Nazi persecution and terror.”

In spite of these restrictions, from 1938 to 1941, from Kristallnacht to the U.S. entry in World War II, more than 128,000 Jewish refugees found sanctuary in America. By the time the U.S. entered the war, however, the wait for a visa was more than 11 years.

While the war was ongoing, many Americans were unaware of the Nazi campaign for genocide. Even when the tragedy was understood, there was little that the United States government could do to intervene until the last year of the war.

Postwar, many Americans were not directly educated on the horrors of World War II and the Holocaust. Through the 1960s, Americans came to learn of the Holocaust through publicized trials of Nazi leaders, memoirs from survivors.

In the 1960s, many young American Jews joined in the Civil Rights Movement alongside African Americans because it affirmed their sense of Jewishness, which implied an obligation to combat discrimination and oppression.