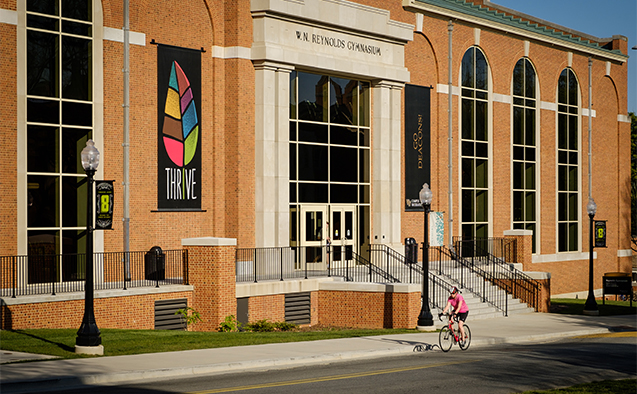 The Wellbeing Center opened in stages in recent years as the historic Reynolds Gym, which opened in 1956, underwent a comprehensive renovation that included the addition of the adjacent Sutton Center. The entire center was open by spring 2018. It consists of 180,000 square feet, making it the second largest building on campus.

Wake Forest professor takes ‘B.S.’ theory to TEDx stage
John Petrocelli hopes his TEDx talk Feb. 23 at the University of Nevada in Reno will be a call to action on B.S.

Petrocelli, the Scott Family Faculty Associate Professor of Psychology at Wake Forest University, began studying B.S. about seven years ago, intent on finding out when and why it happens. For his research, he defines B.S. or “bullshit” as “communications that result from little to no concern for truth, evidence and/or established semantic, logical, systemic, or empirical knowledge.”

He’s not talking about lying or fake news, at least not in all circumstances. Someone who spouts B.S., he explained, doesn’t know what the truth is – and doesn’t even care about the truth. A liar, on the other hand, willfully tries to detract from the truth.

“What’s dangerous is that you only need one or two exposures to a false statement like this to remember it as true,” Petrocelli said. “But we don’t dismiss the bullshitter as we do the liar, so he might have even more influence than the liar.”

Through his research, and the upcoming TEDx talk, Petrocelli hopes to inspire people to “call B.S.” when they hear or read it – and discourage the source from trying it again.

WFU senior interprets for Pope Francis
Anna Grace Guercio, a senior who is majoring in Anthropology with a Linguistics minor, interpreted for Pope Francis during his recent appearance at the World Youth Day 2019 in Panama. She interpreted for the national Panama TV, and its signal was broadcast globally. She covered all the main events with the Pope, approximately 2-3 hours each, taking turns with the other interpreter in the booth. Carlos Fasola, a former WFU graduate student, also interpreted into English for national, international, and podcast radios.