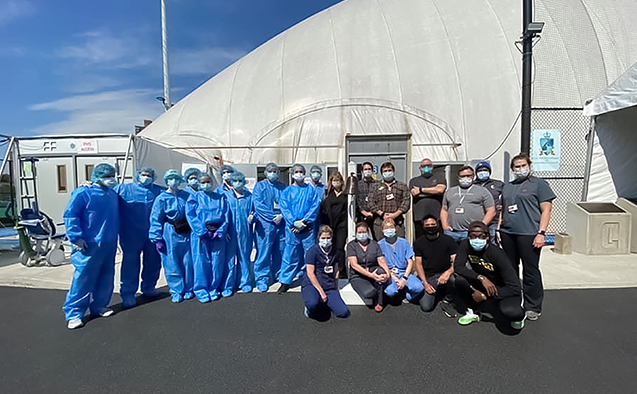 While most Wake Forest students went home after learning that classes would be taught remotely for the remainder of the semester because of the COVID-19 pandemic, Davis Feldman headed to New York to work in a hospital built for coronavirus patients.

“I was sitting at home in my apartment in Winston-Salem taking classes, and out of the blue I saw a post on North American Rescue’s page that basically said they’re looking for military veterans that are medics or have a background in medicine,” said Feldman, a senior biology major from Charlotte. “I have no military background but thought I might as well shoot them an email and see if they can use someone with my skill set.”

Feldman, a certified EMT, will serve as chief of Wake Forest’s student-run Emergency Medical Services team when classes resume in the fall. He plans to attend medical school and become an emergency medical physician. He became an EMT in high school after experiencing a harrowing single-car accident. 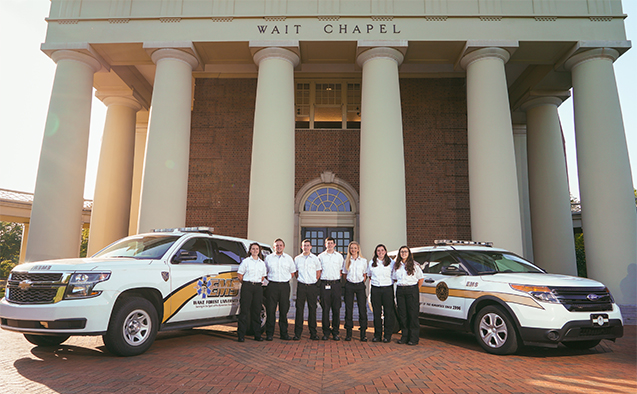 “One of the police officers and some of the first responders said it was one of the worst vehicles they’d seen someone walk away from,” Feldman said. “I don’t know why I wasn’t more seriously injured, but I’m grateful to have walked away from it with only some minor lacerations and some pretty bruised ribs.”

“I think it was the compassion of the EMTs, among anything else, that made me want to become one.” Davis Feldman ('21)

Feldman’s background led him to New York. The hard part was telling his mother.

“I’m the youngest of three and my mother’s very protective,” he said. “I thought it was probably best to tell her of the possibility before I found out whether I was actually going.”

His parents’ biggest concern was whether he would be issued personal protective equipment, or PPE. “That was one of the reasons I felt pretty comfortable going up there, because we’d have PPE,” Feldman said. “Obviously there’s a high risk because every patient we had was COVID-19 positive, but I think I was an ideal volunteer because I’m pretty young with no comorbidities, in pretty good health and have EMT skills.”

Feldman packed lightly for the trip, taking basic toiletry items, scrubs, pants, sweatshirts, a backpack, textbooks and his laptop. During the six-week stint, he lived with other volunteers in a New Jersey hotel across the river from Manhattan. 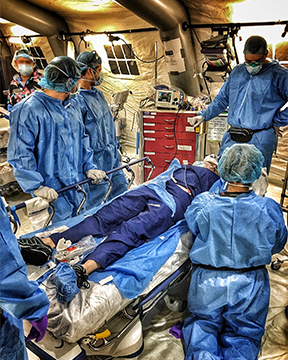 He worked as a medic from 9 p.m. to 9 a.m. in Unit A1 of the Ryan Larkin Field Hospital, a tent hospital that was erected in a soccer field at Columbia University, across from New York Presbyterian Allen Hospital. The makeshift facility had a capacity for more than 280 coronavirus patients, including 36 in Feldman’s unit.

He is unequivocal in saying that working in New York would not have been possible without support from his professors.

“I asked them how could I maintain my academics while also going to New York,” Feldman said. “Their response was, ‘let us know what we can do.’ They were willing to hold office hours at odd times, they answered emails to me and were very accommodating. It was really encouraging to see your professors reach out to you one-on-one to see how you were doing, not as a student but as a human being.”

Biology professor Regina Cordy reached out to Feldman while he was in New York, as did Professor Jim Curran and Professor Susan Fahrbach, chair of the Biology Department.

Cordy said she knew Feldman was an EMT from an essay he’d written while in her Parasitology class, about his experience helping to treat a malaria patient.

“He talked to me about how he would be able to configure his schedule to still be available online for our Tuesday/Thursday Zoom-based classes and assured me he’d still have time to complete all of his coursework online, which he did, including participating in an oral group presentation given over Zoom,” Cordy said. “I was very impressed with Davis for taking on this act of selflessness and for wanting to help others at their time of need.”

Feldman said he wished his stay in New York had been longer, and he wouldn’t hesitate to return if asked. “I can never forget some of the conversations I had with the patients. For the rest of my life I’ll keep some of these conversations, as well as the faces of the patients with me. It was humbling to hear what they had to say but also to be a welcoming face to them.”