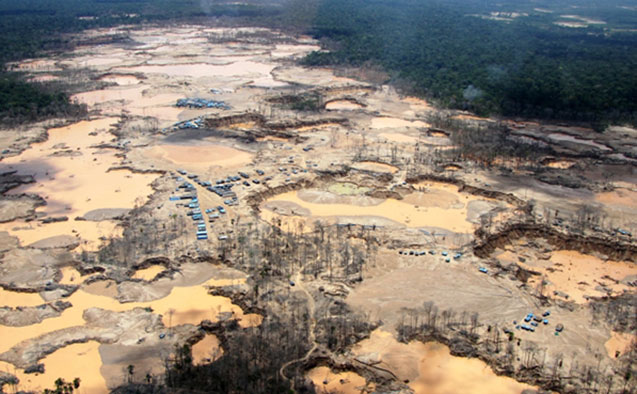 Wake Forest faculty in the University’s Center for Energy, Environment and Sustainability, and its Center for Amazonian Scientific Innovation (CINCIA) are part of an international team of researchers who have discovered that gold mining in the Amazon rainforest is causing exceptionally high levels of mercury pollution in the old-growth rainforest near the mining sites.

The total mercury concentrations in a forested area in Peru’s Los Amigos Conservation Concession were the highest ever recorded.

“What this study found was that the wildest forests left on earth are capturing mercury released by artisanal mining, and at superfund-site levels,” said Miles Silman, Andrew Sabin Presidential Chair of Conservation Biology and Director of Wake Forest’s Center for Energy, Environment and Sustainability. “The wildlife and humans that live within these wild forests are poisoned as well, with effects that we are just beginning to understand.”

Silman and Luis Fernandez, executive director of CINCIA and research associate professor in the department of biology at Wake Forest, were senior scientists that provided guidance in the design and implementation of the groundbreaking study.

Claudia Vega, who is the coordinator of the Mercury Research Program at CINCIA — and a fellow at CEES – was the primary in-country collaborating scientist in Peru for this study. CINCIA founded the first analytical chemistry laboratory in Peru dedicated to studying mercury in the Amazon.

“This study reveals, for the first time, the mechanism of how mercury released into the air by gold mining contaminates tropical forests and forest soils,” Fernandez said. “This atmospheric mercury, which is either deposited on to leaves or absorbed by leaves, eventually falls to the ground and gets incorporated into forest soils.”

The region of Madre de Dios is considered a global biodiversity hotspot, but in recent decades has suffered an unprecedented gold rush. mining is doing irreversible damage to one of the world’s largest remaining pieces of tropical rainforest and threatening its survival. In the Madre de Dios region of Peru, east of the Andes Mountains, nearly 250,000 acres of rainforest, roughly the size of Dallas, Texas, have been razed and transformed into somewhere that looks like a desert pockmarked by tens of thousands of mercury contaminated mining ponds by illegal gold mining.

Gold miners use toxic mercury to pull flakes of gold out of the river sediment. Then, they separate the gold from the mercury using open fire ovens. The heat melts the gold and turns the mercury to a toxic vapor.

“People had a lot of ideas about where mercury might be going in these tropical landscapes, and they turned out to be wrong,” Silman said. “The paper shows that mercury isn’t staying in the mining zone, but rather that trees are scrubbing mercury from the air and transferring it into forest ecosystems, and into forest wildlife and peoples, where it moves up the food chain with unknown effects.”

This atmospheric mercury, which is either deposited on to leaves or absorbed by leaves, eventually falls to the ground and gets incorporated into forest soils.

The study also reveals how these contaminated soils serve as a repository for this deposited mercury, preventing. or at least slowing, its transfer into rivers and lakes where it is transformed into a more toxic form of mercury, Methylmercury, and contaminate aquatic food webs.

The policy implications of this work are clear, Fernandez said.

“Because forest ecosystems bank this mercury, serving as a buffer to slow the transfer to rivers and lakes, these forests need to be protected.” Luis Fernandez, executive director of CINCIA

The loss of these old growth forests reduces this buffering effect, and will likely accelerate the movement of atmospheric mercury into rivers and lakes, where it would do the most harm to wildlife and to the human communities that rely on fish and wildlife for their sustenance.”

The Centro de Innovación Cientifica Amazonica (Center for Amazonian Scientific Innovation, or CINCIA) was established in 2016 through Wake Forest’s Center for Energy, Environment and Sustainability in partnership with the U.S. Agency for International Development (USAID) and other private sector partners. CINCIA has brought together scientists and conservationists to develop transformative solutions to promote sustainable use of tropical landscapes, combat environmental destruction and improve human health in the Amazonian province of Madre de Dios in Peru.

Media coverage of the study