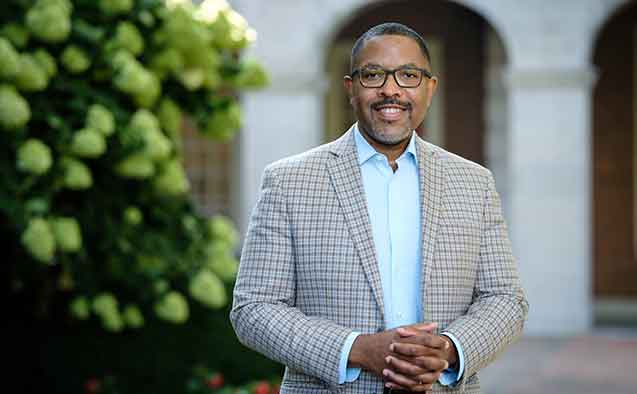 New program will place teachers in high-need schools
By Lisa O’Donnell | Winston-Salem Journal
Three local colleges and universities received federal dollars this week to train and develop future teachers who will eventually work for area schools with some of the highest needs. The Teacher Quality Partnership grant will involve graduate students at Winston-Salem State University, Wake Forest University and Salem College working with the school district in a program called Winston-Salem Teachers for Equity, Achievement, Community and Humanity or WS-TEACH. – 9/16/2022

This story was also covered by WFMY, Yes!Weekly.

New Public Health AmeriCorps program looks to tackle health care gap
By Maya Rodriguez | WMAR-TV (Baltimore, MD)
Marianne Magjuka coordinates the program and is an assistant dean of students and the executive director of the Office of Civic and Community Engagement at Wake Forest. “This is the first year of funding for Public Health AmeriCorps,” she said. “AmeriCorps members will be doing all kinds of different things. They’ll be doing patient navigation services and translation services. They’ll also be working with patients to do follow-up care.” – 9/13/2022

This segment aired on stations nationwide. Two Wake Forest undergraduates were also interviewed for this story.

This announcement was also covered by the Winston-Salem Journal.

‘Whole lot of risk’: MO will vote on convention that could write new state constitution
By Jonathan Shorman | Kansas City Star
Missouri voters are practiced at voting to change the state constitution, but this November they could take the first step toward blowing it all up. The last state constitutional convention took place in Louisiana in 1992, John Dinan, a professor at Wake Forest and one of the foremost experts on state constitutions, wrote in a July article in the Journal of Policy History. Voters fear opening a “Pandora’s box.” – 9/14/2022

Five facts to tell your daughter about men
By Rob Daniels | CKMB-FM
Linda Nielsen, professor of adolescent and educational psychology and author of the book “Between Fathers & Daughters: Enriching and Rebuilding Your Adult Relationship,” said fathers have more important lessons to offer their daughters than they might realize. – 9/16/2022

Cristin Tierney Gallery opens an exhibition of paintings by Jorge Tacla
ArtDaily Newspaper
Tacla’s work is held in, among others, the collections of Tufts University, Wake Forest University, and High Museum of Art. Wake Forest students purchased the work by Jorge Tacla for the University’s Mark H. Reece Collection of Student-Acquired Contemporary Art during their 2021 Art Buying Experience. – 9/12/2022

Warning issued to avoid fish, contact with river water near coal ash spill
WTVR-TV (Richmond, VA)
Researchers from Wake Forest University who used cameras on an unmanned aerial aircraft to create a 3-D image of the spill said that as many as 35 million gallons of arsenic-contaminated water and ash may have made its way into the river. – 9/14/2022

Introduction to the themed collections in memoriam of Prof. Richard T. Williams
By Oana D. Jurchescu, Arnold Burger, Weronika Wolszczak, Edith Bourret-Courchesne | Royal Society of Chemistry
This themed collection of papers in memoriam of Prof. Richard T. Williams covers the topics and fields where he had impact during his exceptional career. Richard’s colleagues, students and friends will forever remember his passion for science, his kindness, his generous mentoring spirit, his love of teaching, and his humor. – 9/16/2022

Novant aims for ‘net-zero’ emissions by 2050
By John Deem | Winston-Salem Journal
“There is a larger, even more ominous threat facing the medical community: our changing climate,” writes Stan Meiburg, a former deputy administrator at the U.S. Environmental Protection Agency and Suzanne Lazorick a professor of pediatrics and public health at the Brody School of Medicine at East Carolina University. “There is no vaccine for this threat, and responding to it will require coordinated local and global action to a degree thus far unseen in human history.” – 9/14/2022

Why does the Wake Forest Demon Deacon sometimes carry a plunger?
By Melissa Leonard Hall | Winston-Salem Journal
The origin of the plunger dates back to Bill Shepherd, a 1960 Wake Forest graduate who performed as the Deacon for three years while he was a student. “He was known at the university and throughout Winston-Salem for his plunger twirling atop the goal posts in the late 1950s,” according to The Little Black Book, a reference book published by Wake Forest about the school’s history. – 9/16/2022

WFU puts students face to face with Jon Meacham
By Kim McGrath | Wake Forest News
Presidential historian Jon Meacham addressed student-moderated questions about the challenges of writing historical biography and whether it is possible to be neutral during the process. “I hope to be fair enough, open-hearted enough, proportioned enough. I hope that if Franklin Delano Roosevelt or Thomas Jefferson read my work they would think it was fair.” – 9/16/2022