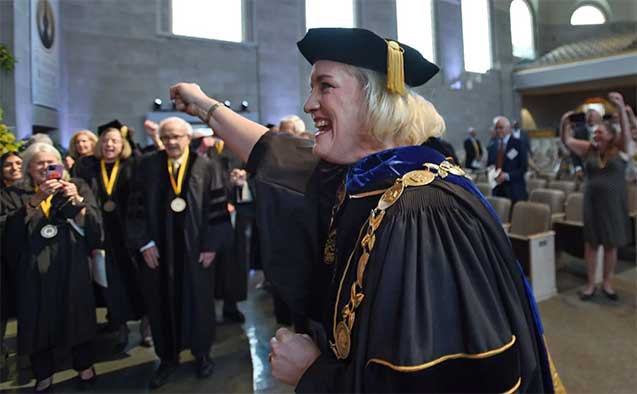 The year in photos
By Walt Unks, Allison Lee Isley | Winston-Salem Journal
A photo of Wake Forest President Susan Wente celebrating her inauguration on March 25 in Wait Chapel made this gallery of top images of the year as selected by Winston-Salem staff photographers Allison Lee Isley and Walt Unks. Photos of Composer-in-Residence and Professor of music Dan Locklair, author and journalism professor Phoebe Zerwick, and action shots of Wake Forest athletes and coaches are included in the collection. – 1/07/2023

GOP rule may dish ‘revenge’ for climate, energy agencies
By Kevin Bogardus, Kelsey Brugger | POLITICO Pro
Under the House Republicans’ proposed rules package, lawmakers could target officials’ salaries and program funding for budget cuts. Environmental and energy agencies could be in their sights. Stan Meiburg, executive director of the Center for Energy, Environment and Sustainability, comments in this article. – 1/05/2023

What did COVID-19 change about the registrar’s role?
By Matt Imboden, Robert Ubell, Rob Spohr | The Evolllution
A few years ago, the world underwent more change than anyone was ready for. Every aspect of higher education was impacted, including the registrar’s office. But the switch to remote learning wasn’t the only thing that registrars had to tackle. “I see new technologies as tools for the jobs we are trying to do and the puzzles we are trying to solve with students and educational programs,” Matt Imboden, chief student services officer in the School of Business. – 1/04/2023

Patient care and trust: What premedical students should know
By Ali Lotfi | U.S. News & World Report
Law professor Mark A. Hall and several colleagues examined trust in the medical profession. They wrote that in medicine, trust comes from a place of vulnerability. People who go to a doctor are inherently vulnerable because they are ill or concerned about illness. – 1/03/2023

Simon Burgess, Mayfair Street Partners promise entertainment, housing, retail in busy 2023
By John Brasier | Triad Business Journal
Mayfair plans to recreate the Woolworth’s lunch counter, where in 1960 Wake Forest University and Winston-Salem State University students staged a sit-in a few weeks after the Greensboro Woolworth’s sit-in. That exhibit will be part of a 6,000 to 7,000-square-foot events center that can handle parties of up to 500 guests. – 1/03/2023

Children’s Read-In Jan. 21 celebrates MLK’s legacy
Yes! Weekly
Wake Forest University is partnering with Winston-Salem State University, the University of North Carolina School of the Arts and HandsOn NWNC to host an event that honors the life and legacy of Dr. Martin Luther King Jr. The Read-In Day on Jan. 21 celebrates King’s achievements and teachings while promoting the importance of reading. – 1/05/2023