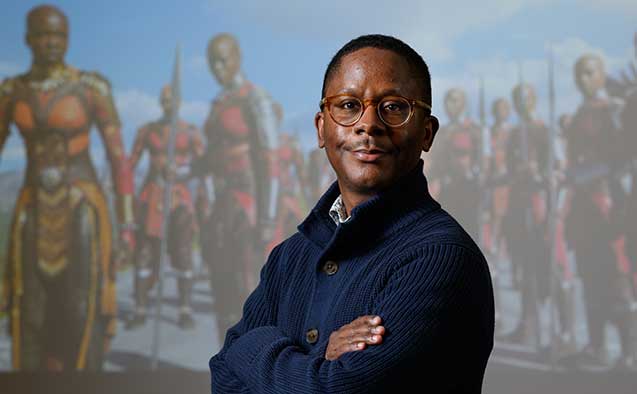 What does cultural depiction in film and television say about the importance of representation for minority groups?

What is the focus of your media studies class at WFU?

“In our media studies courses here at Wake, the goals are not only to give the next generation of filmmakers and content creators the practical skills they need but also to help them view media through a critical lens – one that shows an awareness of media history, industry practices, ethical issues, and sociocultural concerns. In the creation and distribution of films, it’s important to recognize the role that aesthetics, culture, history and technology play” – Media professor Phillip Lamarr Cunningham

More films are dropping directly to a streaming service. Is this good or bad for Black film?

One of the frequent laments about contemporary cinema is that theaters increasingly are reserved for spectacle and big-budget blockbusters. As such, streaming services have become increasingly important for more traditional films and Black films in particular, which already faced difficulties in the global marketplace. Some of the most prominent Black filmmakers – from Spike Lee to Tyler Perry to Lena Waithe – are releasing first-run content on the streamers, which may indeed be a long-term strategy for Black film. To the degree that the streamers are becoming the primary way in which people engage with film, this certainly could bode well for Black films.

China recently announced it is releasing ‘Black Panther’ in February.  Is the tide turning for Black film and access to international audiences?

As part of a grander transmedia storytelling effort, “Black Panther” is an atypical film in general, but especially so for Black films. Conventional wisdom always suggested that Black films do not fare well abroad, even when there is evidence to the contrary (such as the success of 2016 Oscar winner “Moonlight,” which earned more abroad than it did domestically). Though Black films have some difficulties being showcased in major media markets overseas, they have proliferated on the streamers. As I suggest in my article “Resounding success of ‘Black Panther’ franchise says little about the dubious state of Black film, it is perhaps unwise to make assumptions about the state of Black film based on the success of those movies.

Villains and heroes in films seem to represent cultures or religions that are perceived as anti-American. Does this kind of representation reinforce negative stereotypes?

Historically, yes, villains often are seen as antithetical to so-called “American values” and America itself frequently is presented as a veritable empire in genre films (spy thrillers, superhero films, etc.). However, in contemporary films, villains often are more compelling than heroes. They complicate how viewers conceive of justice and injustice, right and wrong. In the recent slate of Marvel films, we see villains who – like their comic book counterparts – are not wholly evil as much as they are extremists.

So with this shift toward complex villains, where does representation play a role?

One of my most cited articles is “The Absence of Black Supervillains in Mainstream Comics,”  which was published in The Journal of Graphic Novels and Comics. In it, I highlight that the best comic book supervillains are able to wield great power and great intellect, are contemplative and can challenge preconceived notions about good and evil. Too often, these capabilities have not been afforded to Black comic book villains. Fortunately, we are now beginning to see this change in the films, particularly with characters such as Killmonger (“Black Panther”) and Kang (“Loki,” etc.).

Contact media@nullwfu.edu to schedule an interview with professor Cunningham.