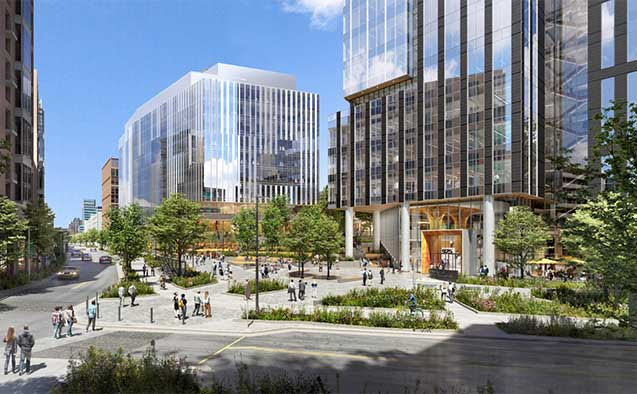 Ground broken for ‘The Pearl’ innovation district
WBTV-TV (Charlotte, NC)
A huge project in midtown Charlotte is underway. It’s for the future of Wake Forest University School of Medicine and “The Pearl” innovation district. “With an additional medical school campus, we will be able to provide training to even more students, many of whom come from diverse backgrounds that are underrepresented in medicine as we educate and prepare the next generation of healthcare leaders,” said Dr. Julie Ann Freischlag, CEO of Atrium Health Wake Forest Baptist. – 1/17/2023

Additional coverage included: WFAE, The Charlotte Observer, The Business Journals, WSOC, the Winston-Salem Journal and a number of other media outlets.

The Why
By Lauren Magarino | Scripps News
Economics professor Robert Whaples is interviewed on “The Why” to discuss the penny and why it should be eliminated. “The point of coins, the point of money is to facilitate commerce. We need something that’ll make transactions with each other easier, and the penny no longer fills that role because it is worth so little,” he said. – 1/11/2023

India’s major role in recovering from Sri Lanka’s worst economic crisis
By Karine Delafosse | Local Today
Sri Lanka has announced spending cuts including cutting its military by a third to 1.35k by next year in a bid to recover from its worst economic crisis on record. Neil DeVotta, professor of politics and international affairs, told SCMP that the “worst foreign policy that Sri Lanka can pursue is the one that threatens India.” – 1/17/2023

More than 1.5 billion people to celebrate the Lunar New Year
By Chloe Nordquist | KMGH-TV (Denver, CO)
According to the Timothy S. Y. Lam museum of Anthropology at Wake Forest, the holiday has a history of about 3,500 years. The holiday is full of stories and myths. During the Tang, Song, and Qing dynasties, the festival became more of what it looks like today with firecrackers and entertainment. Each year, the date of the holiday depends on the lunar calendar. – 1/19/2023

Construction begins on long-awaited Wake Forest University School of Medicine Charlotte
WCNC-TV (Charlotte, NC)
“We are proud that Wake Forest University School of Medicine is among the top 50 research institutions in the U.S.,” Dr. Julie Ann Freischlag, executive vice president and chief academic officer for Advocate Health said. “Adding this second campus will allow us to expand our health technology, research, and education capabilities at both campuses, and allow us to enhance the educational experience for our students who will shape the future of medicine as the next generation of healthcare leaders.” – 1/17/2023

Wake Forest announces ‘Building the Dream’ award winners
By Keri Brown | news.wfu.edu
For more than two decades, Wake Forest and Winston-Salem State have collaborated to host events honoring Dr. Martin Luther King Jr. One of those is the annual ‘Building the Dream’ awards. Both universities present the honor to professors, administrators or students who exemplify King’s qualities and promote diversity within their communities. Six individuals were recognized this week during a joint MLK celebration luncheon. – 1/19/2023