WFU Study Takes Students in Flight with the Albatross 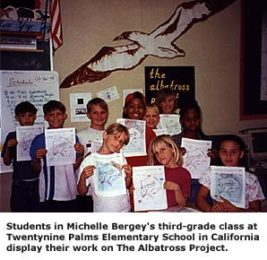 Wake Forest University biologist David Anderson normally does his field studies of seabirds in the wild without much company, but this time is different.

Through e-mail and a World Wide Web site, students in thousands of classrooms in the United States are following the work of Anderson and his research team at Wake Forest University as they track two species of albatross that nest on Tern Island in Hawaii. Tern is part of the Hawaiian Islands National Wildlife Refuge managed by the U.S. Fish & Wildlife Service.

Supported by a $200,000 grant from the National Science Foundation, Wake Forest’s Albatross Project is expected not only to spark students’ interest in science but shed light on such questions as how the availability of food affects the seabirds’ reproduction and how their populations can be protected from declines attributed to longline fishing fleets plying Pacific waters for tuna and other fish.

Anyone can participate in the study by typing “subscribe albatross” in the body of an e-mail message to listserv@nullwfu.edu. Or they can click on “Join the Project” at The Albatross Project’s Web site.

The project began Jan. 22 when one of Anderson’s biologists placed small radio transmitters on a dozen Laysan and black-footed albatrosses at their nesting grounds on Tern. Biologists remove the transmitters once the parents return to Tern from foraging trips at sea that can span several hundred miles. The transmitters are then put on another group of birds so as many different albatrosses can be tracked as possible.So far, Anderson and his colleagues Patricia Fernandez and Paul Sievert have logged the flight paths of 18 albatrosses and are currently monitoring the flights at sea of another 11 (Click here for details on the birds tracked).

“My motivation for doing this is three-fold,” Anderson explained. “First, there are basic science questions that the data will help us answer. We know that albatross populations seem to be declining worldwide because of contact with fisheries, and if we can determine where the feeding zones are, they can be targeted for some action.

“Second, I am interested in pre-college education and this project seemed the perfect opportunity to engage school-age kids with our work,” he said. “And scientifically, the albatross has long been an interest to me as an evolutionary biologist because of their extremely slow reproduction.

“They put off breeding for the first time until they are seven or eight years old,” he said. “The robin in your back yard is breeding the first year.”

Anderson’s project combines the high-tech of orbiting satellites and tiny transmitters smaller than a dollar bill with the high-touch, interpersonal world of classroom learning.

Each time they pass over the northern Pacific, the Argos System’s satellites scan for the signals emitted by the seabirds’ transmitters. If a positive contact is made, the satellite notes the strength of the signal and then locks in the latitude and longitude, time and other data and transmits it to receiving stations in Fairbanks, Alaska; Lannion, France; or Wallops Island off the coast of Virginia.

Fernandez, a first year master’s student in biology at Wake Forest, posts the latitude, longitude and other information for each bird to the schools and filters questions and comments from students for Anderson and other members of the research team.

“Every person who subscribes and gets some benefit makes me happy,” Anderson said. “It (the listserv) can be as big as it wants to be. Who would have thought a kid could, in their class or at home, collect data on chlorophyll concentrations in the open ocean and see what is different about the places the birds go and where they don’t go?

“These birds have never been satellite tracked before, so they are finding out the answer to the big question, ‘Where do they go when they leave the nesting site?’ along with us.”

The data from Anderson’s study is also being distributed by the Galaxy Classroom to its 600 subscribing elementary schools in the continental United States, to another 600 fifth- and sixth-grade classrooms in the Hawaii State Teleschool through the KidScience television program, and to several schools in the Winston-Salem/Forsyth County system in North Carolina.

“One of our goals is to help students learn science by doing science,” said Bill Schmitt, director of the Galaxy Classroom, which provides programming in science and language arts to classrooms. “Through The Albatross Project, students are doing science right along with scientists in the field,” he said.

“This is really one of the most exciting projects for kids at this age level that I’ve seen because it’s almost impossible to get the opportunity to do that.”

Patty Miller, the Hawaii State Teleschool teacher who produces KidScience, said that the unit on albatrosses follows a study of reefs. “I did a program right before the birds were released and started transmitting,” she said. “I think The Albatross Project is cool. What teachers say is that it gives them a reason to get in and use the Internet.”

Through The Albatross Project’s Web site, students can plot the paths of the birds against surface water temperature maps of the ocean and maps showing chlorophyll concentrations — found to be a factor in where the birds feed during Anderson’s pilot satellite tracking studies of another albatross species in the Galapagos Islands in 1995.

They can also learn about the U.S. Fish and Wildlife Service’s work on Tern, read researchers’ field notes, post questions to the scientists and even use a program on the site to calculate the energy cost to birds to fly with the 30-gram transmitters taped to their backs. They can also use the program to design a bird that could fly even faster and farther than the real thing.

Sievert, the postdoctoral student at the University of Massachusetts who is placing the transmitters on the birds in Anderson’s study, arrived on Tern on Jan. 9 and began testing dummy transmitters on the Laysan and black-footed albatrosses before identifying the first 12 for tracking after their chicks hatched. He said that a special adhesive tape holds the transmitters in place. The transmitters are taped between the wings in the center of the seabirds’ backs to avoid disrupting their balance.

Sievert said that the transmitters could send data for as long as five or six months until their batteries run out.

Anderson said that much of what is know about where the Hawaiian albatrosses find food in the North Pacific has come from boat-based observations. But boats are too slow to follow the birds as they fly, and airplanes are too fast and have to be refueled too often to keep pace with foraging trips that can last from days to weeks.

From boats, biologists also cannot determine the age or sex of the birds being observed or whether they are from Tern or strangers from another nesting area.

That’s why satellite tracking has proved so effective, Anderson said, recalling the satellite telephone hookup that allowed him to prepare researchers in the Galapagos for the arrival of birds he had been following at Wake Forest by e-mail in 1995.

“I’d say, ‘You better be prepared for so-and-so to come back. Ten hours from now this bird is going to be showing up on your island,'” he said. “We have the same kind of interaction here.”

Five years ago, Anderson said that a study like The Albatross Project would not have been possible. He said that there wasn’t a transmitter small enough to not interfere with an albatrosses’ flight but still powerful enough to send a signal that could be picked by by satellite.

From tracking the albatross in the Galapagos, Anderson said that the birds can fly the equivalent of a flight from New York to Miami — or San Diego to Seattle — and back on a feeding trip.