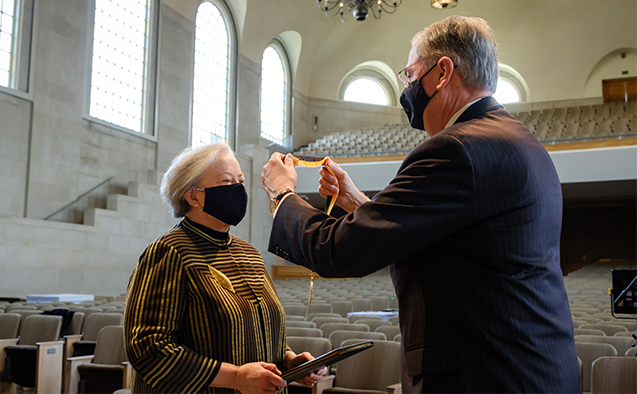 Donna A. Boswell, Wake Forest University’s former and first female chair of the Board of Trustees, received the Medallion of Merit during the annual Founders’ Day Convocation. The event, pre-recorded to observe University and state COVID-19 protocols, was streamed on Feb. 25 and the video can be viewed here.

The University’s highest honor, the Medallion of Merit, is presented to individuals who have rendered distinguished service to Wake Forest, including past presidents, trustees, benefactors, alumni and retired faculty and administrators. After a video chronicling Boswell’s relationship to Wake Forest, which began when she enrolled as a freshman in 1968, President Nathan O. Hatch thanked and praised her for her leadership and service before presenting her with the medallion inside Wait Chapel, where Founders’ Day is normally held. 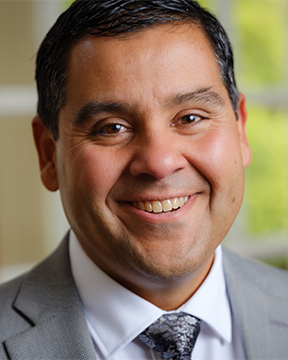 Besides being virtual, the convocation was different in other ways. Instead of one keynote speaker, the Founders’ Day message was delivered by José Villalba, vice president for diversity and inclusion and chief diversity officer, and Erica Still, associate dean for faculty recruitment, diversity and inclusion. Villalba and Still co-chair the President’s Commission on Race, Equity and Community. They were introduced by Student Government President Miles Middleton.

“Erica and I are humbled by the opportunity to help frame not only our institution’s history but also its future,” Villalba said. Today’s Founders’ Day Convocation is a bridge of sorts, between how we’ve spent the last few years reckoning with the establishment of this institution and how we will cultivate what we’ve known and learned into forging a more welcoming and inclusive campus community for all who learn, live and work at Wake Forest University.” 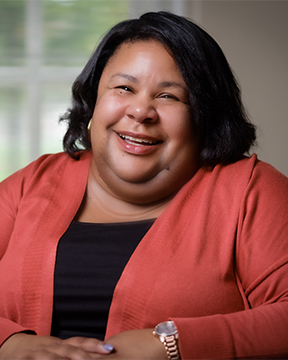 Added Still: “We know that we cannot afford to turn our backs on the past, but, we have an obligation to the present, to this moment where we find ourselves as well,” she said. “This Founders’ Day, we find ourselves prompted to reflect on where and who we are.”

Hatch committed to a continuance of efforts around the apology he issued during Founders’ Day 2020 for the University’s participation in and benefit from slavery. “Founders’ Day remains a longstanding tradition at Wake Forest, but beginning last year, we also approached this event and our history with new eyes, deeper awareness and a growing perspective. This is deliberate and intentional and necessary.”

The apology was an important step in understanding Wake Forest’s past, improving its present and creating a promising future, Hatch said. “Although the pandemic could have postponed the progress we had been making, it in fact served to inspire,” he said. “And in the last year, we have seen inequities laid bare in our nation, quite dramatically, and that has only ignited an urgency to our efforts.”

After remarks by Hatch, Villalba and Still, Boswell was awarded the Medallion of Merit. She joined the Wake Forest Board of Trustees in 2004 and was named its first woman chair in 2015, a groundbreaking appointment she held for three terms. After graduating from Wake Forest, Boswell earned a doctorate at Penn State University and taught psychology at Wesleyan University. She later became an influential attorney in Washington D.C., specializing in health care law.

Beth Hopkins and Boswell first met in 1969 when Boswell served as a resident adviser.

“I was among the first Black women to stay in a dormitory, and I wanted to know how it would be for me and she was very honest in her assessment,” Hopkins recalled in the video. “She said that she was not overly familiar with how people responded to Black people in a dormitory setting but that she would always make sure that I was treated fairly, and that’s all I needed to hear from her. Because she was so assuring and so warm, I decided to come to Wake Forest.”

Before the video on Boswell, senior music performance and psychology major Julianne Zhu delivered her winning senior oration titled “Heart of a Child.” Zhu, of Shanghai, discussed spending her first Thanksgiving at Wake Forest with a host family. 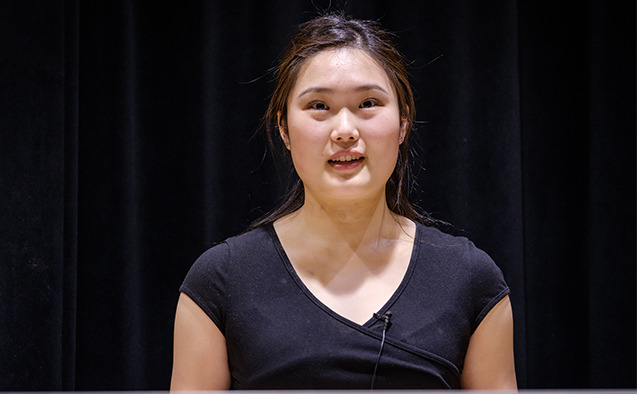