Sufi Muslims Whirl into WFU for Year of Religion 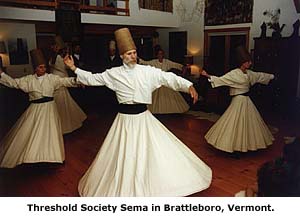 Shaikh Kabir Helminski and Sufi Muslims from Vermont’s Threshold Society will visit Wake Forest University Feb. 4-6 as part of its 1997-98 Year of Religion in American Life.

The highlight of the visit by the group will be a performance of the Sema ceremony by the Whirling Dervishes of Turkey — members of the Mevlevi order of Sufism, a mystical branch of Islam that traces its origins to the 13th-century poet Mevlana Jalaluddin Rumi. The Sema will begin at 9 p.m. on Thursday, Feb. 5, in Brendle Recital Hall.

This meditation in movement is performed by six whirlers accompanied on traditional instruments including the ney (reed flute), tanbur (long-necked lute) and bandir (frame drum). The Sema begins when the whirling dervishes enter the auditorium in black cloaks and tall, cylindrical camel hair hats, followed by their spiritual master, Shaikh Helminski.

Then they cast off their cloaks to reveal white robes, symbolizing spiritual rebirth, and, one by one, begin to whirl. Dervishes view the spinning ceremony as a way to ascend to spiritual perfection.

Two other events are also open to the public: an Ayin-I Jam on Wednesday, Feb. 4, from 8-10 p.m. in Room 401 B-C of the Benson University Center (Ayin-I Jam is an informal and spontaneous evening of Sufi poetry, chanting known as dhikr, music and whirling); and more Sufi music, movements, dhikr and remarks on Sufism and Rumi on Friday, Feb. 6, from 8-9:30 p.m. in Brendle Recital Hall.

The Sufi Muslims visiting Wake Forest are from the Threshold Society, a non-profit educational foundation based in Brattleboro, Vermont, that has developed programs providing a structure for practice and study within Sufism and spiritual psychology. Shaikh Helminski is their spiritual guide and the Society’s director.

Editor’s Note: .Jpeg photos of the Sema, dervishes and Helminski are available for electronic transmission and on diskette. Direct photo requests to Wayne Thompson in the News Bureau at 910-758-4393.