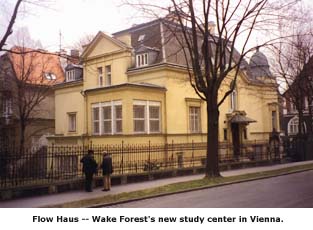 Winston-Salem businessman Victor I. Flow Jr. and his wife, Roddy, are making a major gift to Wake Forest, enabling it to buy the 7,200-square-foot residence in the historic Austrian city considered a gateway to eastern Europe.

Called Flow Haus in honor of the Wake Forest trustee and his wife, it will be Wake Forest’s third residential study center in Europe, expanding opportunities for students to live and study abroad under the direction of Wake Forest faculty. Promoting international study is a goal of the Wake Forest Undergraduate Plan, called the Plan for the Class of 2000 when approved by trustees three years ago. Wake Forest’s other residential study centers are London’s Worrell House and Venice’s Casa Artom, where approximately 1,700 students have studied since the houses opened in the 1970s.

Built in the 1890s, the stately, three-level home stands in a northwestern Vienna neighborhood distinguished by embassies and diplomatic residences. Unoccupied now, the villa has served as the private residence of American embassy officials.

Wake Forest president Thomas K. Hearn Jr. announced the gift at a university gathering Friday following a regular meeting of the Wake Forest board of trustees. Flow, a 1952 Wake Forest graduate who is chairman of Flow Automotive Companies, and his wife attended the announcement. Hearn did not announce the amount of the gift.

Hearn said the new program in Vienna helps meet the growing demand for international study by Wake Forest students. Thirty percent of the 1997 graduating class, for instance, studied abroad during the course of their Wake Forest studies. In addition to traveling to London and Venice, students participate in exchange programs established with universities in Spain, France and Asia. Students also study in non-Wake Forest programs abroad.

Students likely will take classes on the villa’s ground level and sleep upstairs. A basement will provide an apartment for faculty.

Renovation is expected to begin as soon as possible this year. The work may take about three months. A firm in Vienna has been retained already to complete the work.

Paul D. Escott, dean of Wake Forest’s undergraduate college, anticipates students taking German and a wide variety of other classes. As is done at the London and Venice houses, local experts in a number of subjects may participate in the instruction of the students.

University officials are optimistic that Wake Forest will be able to establish a closer relationship with the nearby University of Vienna, which will afford special educational opportunities for Flow Haus students.

Wake Forest already has a relationship with the Vienna university, as well as another Austrian institution-the University of Innsbruck. In collaboration with those universities, Wake Forest researchers are helping unravel the mysteries of the 5,300-year-old “Iceman”-the Stone Age man whose body was found frozen in a glacier in the Austrian Alps in 1991. The collaboration of researchers from Wake Forest’s Reynolda and Bowman Gray campuses with the Austrians began in 1995 when a Wake Forest delegation took part in an “Iceman” symposium in Vienna.

“It is a gorgeous villa with the atmosphere of the 1890s in a wonderful part of the city,” Kairoff declared.

As a musician, Kairoff sees Vienna “as a kind of mecca.”

“From Mozart to Mahler, hundreds of great masterpieces were composed within a few minutes of the house,” said Kairoff, a pianist.

“Culturally, Vienna has an incredibly rich history,” Kairoff added. “From the 18th century to the present, Vienna has been on the cutting edge of music, art, architecture and psychology.”

Kairoff anticipates the study of music will be at the center of study in Vienna, as has theatre in London and art in Venice.

The establishment of Flow Haus is a natural outgrowth of Wake Forest’s expanding commitment to international study, according to university officials. That commitment was expressed in spring 1995 when trustees approved the Wake Forest Undergraduate Plan, which has received international attention for greatly expanding the use of computer technology on campus. A less prominent feature of the 37-point plan calls for nurturing international study, in part, by creating new study abroad scholarships. The scholarships will be awarded this year for the first time.

“It is vital that our students have an opportunity to learn about the world,” said Escott, dean of Wake Forest’s undergraduate college. “Our world is becoming a global community to a greater extent every year.”

“The new programs that we are developing give Wake Forest a greater opportunity to be more vitally engaged with the world,” he added.

Kairoff says the benefits of study abroad are long lasting for students.

“One of the wonderful things that happens is that students gain a perspective of themselves and the world that will last their whole lives,” Kairoff said.