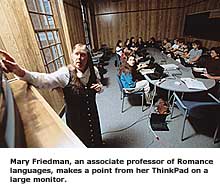 Two years ago, Wake Forest University freshmen arrived on campus as the first class to receive laptop computers as part of a new campaign to enrich undergraduate learning through new technology, classes, faculty, scholarships and more. This fall, those students — juniors now — are turning in their IBM ThinkPads for new ones as the school marks another stage in carrying out the Wake Forest Undergraduate Plan.

“We’re right on schedule,” said Jay Dominick, assistant vice president for information systems, who has overseen distribution of laptop computers to succeeding freshman classes since the plan’s start. “When the plan was launched in fall 1996, we intended to replace our students’ computers after two years, making certain the students benefit from significant improvements in new hardware and software.”

The new computers — ThinkPad model 380XD — will be distributed to juniors on Saturday, Aug. 22, from noon to 4 p.m., and on Monday, Aug. 24, from 1 to 6 p.m. Approximately 940 juniors will bring their old computers — ThinkPad model 365XD — to Reynolds Gymnasium to make the switch. The used computers are being sold to the Winston-Salem/Forsyth County schools in September. Members of this fall’s freshman class will pick up their ThinkPads in Reynolds Gymnasium from 8 a.m. to noon on Aug. 24. Nearly 600 of about 950 freshmen arranged to receive their computers early this month at their homes. Students are also provided Lexmark color inkjet printers that they use through their four years of college. All of the printers are distributed at the gymnasium.

The Undergraduate Plan, as a whole, is progressing well, said Paul D. Escott, dean of Wake Forest’s College of Arts and Sciences.

“More than two dozen new faculty have been hired, and more are coming in the next few years,” Escott said. The Undergraduate Plan calls for hiring 40, in all, by 2002.

“The faculty deserves recognition for creating more than 100 first-year seminars,” he added. The new classes, with only 15 students in each, develop analytical, writing and verbal skills early in students’ college careers.

Students already are taking advantage of additional scholarships for studying abroad-including in Wake Forest’s residential study centers in London and Venice. In keeping with the plan’s call for fostering international study, another study center will open next fall in Vienna in a villa recently bought by Wake Forest.

New merit fellowships are being awarded, as well, this year to juniors for work on research and other projects with senior faculty.

“The fellowships bolster our long-standing commitment to close interaction between students and faculty,” Escott said. “Overall, that’s what the plan is largely about, promoting individualized instruction and mentoring by senior faculty. We want our students to get the most benefit possible from their undergraduate experience.”

The new technology plays a part in that effort, with faculty reporting they are finding expanded opportunities for communicating and working with their students.

“Many members of the faculty are developing new and enriching aspects of teaching through the Internet,” Escott added.

Students and faculty have access to the Wake Forest computer network practically everywhere. Classrooms and residence hall rooms have computer connections. In many classrooms, a connection to the network is available for each student.

Faculty teaching first-year seminars are among those who have most quickly made use of new technology. Patricia Dixon, a music instructor, is one of those taking advantage of it. The Web and software enabling collaborative learning are key elements of her seminar, “Songs of Protest: The Last 35 Years in the Americas.”

“The technology has helped me to organize multimedia materials for the classroom. It has provided me with a complex platform for presenting many concepts and ideas,” said Dixon, who grew comfortable with the technology only last year.

One of the course’s major assignments is to prepare a computerized presentation on a topic using Power Point software.

“Students learn the technology very quickly, and make some excellent presentations in the classroom,” said Dixon, who calls on the software extensively in her own presentations. “When they realized that I had never done it until recently, they believed that they could do it, too.”

Dixon anticipates having protest singers join in this fall on some class discussions that take will take place on computer, outside her classroom. The ability to bring outside experts into computerized class discussions is one of the many positive features of the technology, according to Wake Forest faculty who are using it.

This fall, experts from several nations are expected to present their viewpoints electronically in a seminar titled, “Globalization and Diversity: Whither the State?”

“It looks like we’ll have people from South America, Eastern and Western Europe, Pakistan and the U.S. participating electronically,” said Craig Runde, director of the International Center for Computer Enhanced Learning at Wake Forest. He has teamed with Professor of Politics Charles H. Kennedy to teach the class, which examines the stresses on today’s nations caused by various aspects of globalization.

“The technology helps bring other voices from distant parts into our classroom,” Runde said.