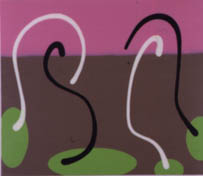 A second exhibit, “Home Grown Cool: Recent Painting from Chicago,” will be shown in the upstairs gallery. Both exhibitions run through Nov. 15.

“Endurance” is made up of 63 large format photographs and includes the work of 40 artists. Many of the works documented in the exhibit are from the 1970s and 1980s, including the most famous piece-the “bed-in” of Yoko Ono and John Lennon.

Some of the performance artists represented in the show used their own bodies as artistic mediums. For example, a photograph of Chris Burden’s 1971 performance titled “Shoot” is included in the show. Burden arranged for a friend to shoot him in the arm.

Other performances documented in the show focus on immense self-discipline. Artist Techching Hsieh is famous for his yearlong performances. In one, he punched a time clock every hour for a year.

The exhibit was organized by Exit Art/The First World, an alternative exhibit space in New York, and curated by Jeannette Ingberman and Papo Colo. Because the exhibit contains adult subject matter, children under 16 should be accompanied by an adult.

“Home Grown Cool: Recent Painting from Chicago” shows the works of six contemporary Chicago painters and is curated by Dan Devening, also a Chicago painter. The exhibit includes oil, acrylic and mixed-media works on canvas. One of the six artists, John Phillips, will discuss his paintings and the works of the other artists on Thursday, Nov. 12, at 3 p.m. in Room 9 of Scales Fine Arts Center. Admission to the lecture and the exhibits is free.