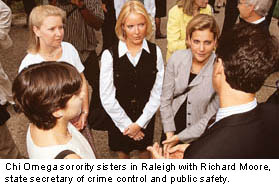 The first recipients have been selected for a scholarship honoring two Wake Forest University students who died in a drunk driving accident that sparked a statewide lobbying effort to strengthen the state’s DWI laws.

Wake Forest Chi Omega sorority sisters Maia Witzl and Julie Hansen were killed in 1996 in Winston-Salem when they were riding in a car that was hit by a drunk driver. Witzl and Hansen, sophomores when the accident happened, had been scheduled to graduate this May. Wake Forest students began a successful campaign after the accident to change North Carolina’s drunk driving laws.

As an additional legacy, the Maia Witzl and Julie Hansen Chi Omega Scholarship was created by their sorority sisters. The first recipients are Lindsay Bricolo, a senior at Glenn High School, and Kerri McDermott, a senior at Mt. Tabor High School.

Bricolo and McDermott will each receive $1,500 to be used toward their college education.

Bricolo and McDermott both rank among the top five of their class. Bricolo’s activities include serving as treasurer of her school’s Key Club and captain of the cheerleading squad. McDermott runs cross-country and track. She also is president of the school’s Students Against Drunk Driving chapter and the Fellowship of Christian Athletes.

Drunk driving affected McDermott’s life, as well. She was hit by a drunk driver and broke her back one month to the day of Witzl’s and Hansen’s accident. Both accidents occurred within about a mile of each other on Polo Road.

This is the first year of the scholarship program, which awards two high school seniors money to be used toward their continued education at any college, university, community college or technical school. Recipients must reflect the ideals of Witzl and Hansen and be enrolled in the Winston-Salem/Forsyth County school system.

The Wake Forest Chi Omega chapter is responsible for raising money for the scholarship fund and the amount of the individual awards will depend on those efforts. The sorority also assists with the interviewing candidates.

The scholarship’s administration and application process is handled by Safe Sober Prom Night.