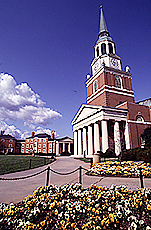 Wake Forest University, which hosted a debate by presidential candidates George Bush and Michael Dukakis in 1988, is now teaming with the Winston-Salem Convention and Visitors Bureau (CVB) in a bid to bring another presidential debate to campus in 2000.

Wake Forest and the Winston-Salem CVB have submitted a formal proposal to the Commission on Presidential Debates (CPD) to host a debate next year in the university’s Wait Chapel, where Bush and Dukakis squared off nearly a dozen years ago.

The CPD will announce its final site selections in January.

“At Wake Forest, we are enthusiastic about the prospect of bringing a presidential debate to our campus and Winston-Salem,” said Wake Forest President Thomas K. Hearn Jr. “This would be an extraordinary opportunity for our students and faculty.”

“Having hosted one already, we understand the importance of a presidential debate to our political process and the preparation necessary to ensure its success,” Hearn said. “Our experience with such a momentous event should benefit everyone involved, including the commission and the candidates.”

In addition to experience, Hearn said the university offers an extensively renovated Wait Chapel and a campus that is recognized nationally for its sophisticated computer facilities.

Since the 1988 debate, the 2,200-seat chapel was renovated from top to bottom, with the installation of new sound, lighting and heating and air conditioning systems, as well as a new ceiling especially designed to enhance sound.

Stephan Dragisic of the Winston-Salem CVB said the organization is “committed to this event and working closely with Wake Forest University.”

“There is citywide support for this event,” said Dragisic, convention sales manager with the Winston-Salem CVB. “Letters of endorsement have been sent to the Commission on Presidential Debates by Winston-Salem Mayor Jack Cavanagh, the Greater Winston-Salem Chamber of Commerce and Winston-Salem Police Chief Linda Davis.”

Like the university, Dragisic said, the city offers the facilities required for hosting a major national event drawing national and international media.

“Since 1988, Winston-Salem has seen tremendous growth in the number of hotel rooms available to visitors, as well as renovation and expansion of meeting facilities,” Dragisic said. “This, combined with the services available through the Winston-Salem Convention and Visitors Bureau, make Winston-Salem well prepared for a presidential debate in 2000.”

Paul Escott, dean of the College at Wake Forest, said students and faculty have expressed support for the prospect of hosting a debate on campus again.

“It was such a good experience for our students in 1988,” Escott said. “Last time, hundreds of students had an opportunity to assist with the debate.”