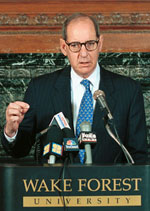 Twelve years after hosting a debate between presidential candidates George Bush and Michael Dukakis, Wake Forest University has been chosen as the site of a 2000 presidential debate.

The Commission on Presidential Debates (CPD) announced early today (Jan. 6) that it has selected Wake Forest to host a presidential debate proposed for Oct. 11. The debate is scheduled to be held at 9 p.m. in Wake Forest’s Wait Chapel, where Bush and Dukakis met in 1988 to debate foreign and domestic policy in front of an estimated 65 million U.S. television viewers.

In the fall, Wake Forest teamed with the Winston-Salem Convention and Visitors Bureau (CVB) to submit a bid to bring a 2000 debate to the Wake Forest campus.

“We are delighted at the prospect of holding on our campus one of the most important events of the 2000 elections,” said Wake Forest President Thomas K. Hearn Jr.

Hearn met with the news media today to discuss the commission’s decision.

“I am convinced that one reason the commission decided to return here is that the city, the county and the university made their experience in 1988 so positive, and we intend to do that again,” Hearn said.

“I want to thank the Winston-Salem Convention and Visitors Bureau for their role in this successful bid,” Hearn added. “They are partners in the preparation and execution necessary to ensure an excellent debate.”

Stephan Dragisic, convention sales manager with the Winston-Salem CVB, has said the organization is “committed to this event and working closely with Wake Forest University.” Others in Winston-Salem have joined in expressing their support for the event, including Winston-Salem Mayor Jack Cavanagh and the Greater Winston-Salem Chamber of Commerce.

Wake Forest will be required to recruit sponsors to provide a total of $550,000 to the commission for the debate’s production.

“We will set about that task right away,” Hearn declared. 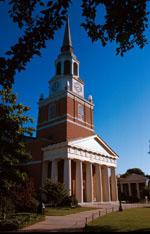 As the university did in its formal proposal, Hearn commented that Wake Forest has experience on its side.

“Having been through this experience once before, we have a very good idea of the logistics required,” he said.

Wake Forest also expects its extensive information technology resources to play a role in the debate. The commission has indicated that it is looking for creative ways to use technology in the debates. In 1999, Yahoo! Internet Life magazine ranked Wake Forest third among the nation’s 100 most wired colleges and universities.

The Sept. 25, 1988, presidential debate at Wake Forest occurred after three Wake Forest undergraduates proposed the idea to the university in 1987. Supported by the university, the students–Michael Smith, Beth Dawson McAlhany and Scott Dubois–enlisted the support of their fellow students in bringing the debate to campus.

“To have that experience as a student was extraordinary,” McAlhany said in a recent interview.

“It was a very big event in my life that I am still proud of,” said McAlhany, who is director of marketing for Kindermusik International in Greensboro.

McAlhany, Smith and Dubois graduated in 1989. Smith is managing director for PNC Capital Markets Inc. in Pittsburgh; Dubois is a senior sales representative for Nokia Mobile Phones in Atlanta.

Smith considers the 1988 Wake Forest debate as setting the standard for other presidential debates since that time, observing that many have occurred on college campuses.

“Practically everybody on the Wake Forest campus had a chance to play a part in history,” said Smith. “It was a unique educational experience for everyone.”

The university estimates that about 600 students participated in some manner in the 1988 debate, many of them assisting news organizations, the commission or others. Hearn said today that he anticipates the 2000 debate at Wake Forest will offer many students an opportunity to participate and learn.

Wake Forest alumnus Dubois recalled that the previous debate provided him with a lifelong lesson.

“I learned the value of being totally committed to something,” Dubois said recently.

The debate’s moderator was PBS’s Jim Lehrer. The panelists were Peter Jennings of ABC, John Mashek of the Atlanta Constitution and Ann Groer of the Orlando Sentinel.