WFU to present African song and dance in ‘Mandinka Epic’

The program, featuring a cast of 30, is the fourth in the 1999-2000 Secrest Artists Series. Through a blend of traditional music and dance, the performance depicts the history of the Mandinka tribe of West Africa, spanning the period between the 12th and 14th centuries.

Many of the rhythms, lyrics and poems performed are from traditional Mandinka songs. The music used in the production features ancient instruments like the “djembe,” “sabars,” and “tamas,” all types of drums, and the 21-string “kora,” a harp-lute. Mandinka music has become popular in the world music scene and is familiar from films such as “The Lion King.”

Mandinka refers to a region and society located in West Africa and the common language they speak. The region covers much of what is now Senegal, Gambia and Mali.

The Mandinka are famous for their “griots” (educators and oral historians), on whose stories this performance is based. The Mandinka heritage dates back to the Mali Empire (approximately 1075-1465 AD), which controlled the Saharan trade industry. The descendents of this ancient tribe have preserved the artwork, rituals, stories and folk songs of the Mandinka culture. 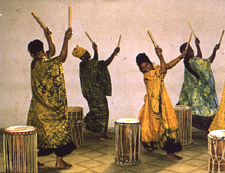 According to African legend, the Mandinka reached the Americas before Columbus. There is archaeological evidence pointing to the presence of West African influence in several South and Central American civilizations.

“The Mandinka Epic” tells the story of a struggle for power and wealth that ultimately led to exploration and discovery. It is an interpretation of the historical events as told by the “griots,” centering on the dominance of three great kings. The story ends with the arrival of the last of these kings, Mansa Bakari, in the Americas.

“The Mandinka Epic” is directed and choreographed by Jean Pierre Leurs. Mandinka will perform Feb. 5-11 at the Kennedy Center. On its national tour, the group is only making two stops in North Carolina cities.

General admission tickets to the concert are $18 for adults, $12 for senior citizens and non-Wake Forest students. Group discounts are available. For tickets, contact the Wake Forest Theater box office at 336-758-5295. The box office is open from 12 p.m. to 5:30 p.m. Monday through Friday.