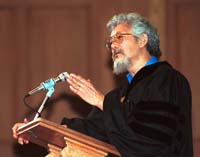 The real bottom line is the environment, not the economy, according to Canadian environmentalist and television host David Suzuki at Wake Forest University’s Founders’ Day Convocation Thursday, Feb. 10.

Suzuki spoke at Wake Forest as part of “Science and Technology: The Next Millennium,” the university’s yearlong celebration of scientific inquiry.

Recent economic prosperity in North America “masks a far more urgent reality,” said Suzuki. “All of the indicators that scientists provide us, indicate that the very life support systems of the planet are being steadily undermined, often by the activity we celebrate on the stock market.”

Suzuki emphasized that as biological beings, people are completely dependent on clean air, water, soil and energy for survival and health.

“We are the earth because we are made up of the stuff of the earth,” he said. ” I mean this in the most literal and scientific way.”

To illustrate his point, Suzuki said, “We are 70 percent water by weight. We are a big blob of water with enough organic thickener added so we don’t dribble away on the floor.”

“And, yet we are now tearing at the web of living things that constantly replenishes, cleanses and renews air, water, soil and clean energy,” said Suzuki, author of the book, “Sacred Balance: Rediscovering Our Place in Nature.”

“I believe the challenge of this millennium is to rediscover that sense of imbededness in the earth and the fact that we literally are those things and that we’ve got to deal with those through our economies, our social groupings and our politics in a radically different way,” said Suzuki. “This is the challenge of our time.”

To understand the magnitude of the impact humans have had on the earth, he suggests talking to society’s elders.

“Ask your elders, what was this place in the world like when you were a child? … Everywhere I go, I ask them and they start their answer with the same terrifying phrase-‘It used to be so different.’

“All over the world, our elders are a living record of the enormous changes that have happened on this planet in the span of a single human life,” said Suzuki, who hosts the long-running Canadian Broadcasting Corporation program, “The Nature of Things.”

Suzuki heads the David Suzuki Foundation, which searches for solutions to environmental problems. He has written more than 30 books about science, including 11 for children. Known for explaining the complexities of science in an understandable way, he is familiar to American television viewers as the host of the PBS series, “The Secret of Life” and the Discovery Channel’s program, “The Brain: The Universe Within.”