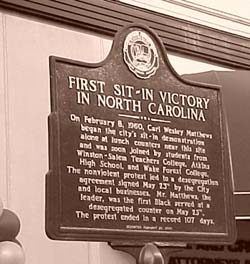 On the anniversary of their historic sit-in, the original student protesters from Wake Forest University and Winston-Salem State University were honored by their alma maters and the city of Winston-Salem with a commemorative walk and dedication of a historical marker.

Eight of the original 21 students returned–three from Wake Forest and 5 from Winston-Salem State– for anniversary celebration events on Feb. 23 and Feb. 24. They were joined by Carl Wesley Matthews, who led Winston-Salem’s sit-in movement and participated in the student sit-in.

On Feb. 23, a crowd of approximately 200 people, including the sit-in participants, family members of deceased participants, schoolchildren, students and administrators from both universities, and local politicians and community members, gathered for the commemorative walk in downtown Winston-Salem.

The crowd stretched from sidewalk to sidewalk as they marched from the Sawtooth Center on Marshall Street to the dedication site at 11 W. 4th St., near where the sit-in took place.

As the crowd marched, many people locked arms and sang “We Shall Overcome” and other inspirational songs. 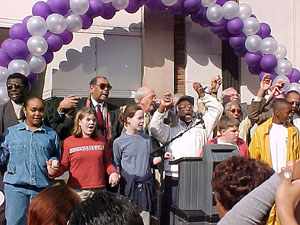 During the dedication ceremony for the historical marker, Winston-Salem’s Mayor Jack Cavanagh said the sit-in participants created a “new era” for the city.

“The statements that these folks made regarding past discriminatory practices lit the fires of our conscience–yours and mine–and joined the demands being made in cities, towns and villages all over this country,” Cavanagh said.

Lunch counter protests in Winston-Salem began on Feb. 8, 1960, when Matthews was denied service at the whites-only lunch counter of a Kress store. Demonstrations against segregated lunch counters continued for several months, including the historic sit-in by students from Wake Forest and Winston-Salem State on Feb. 23.

That day, Matthews and 21 students–10 from Wake Forest and 11 from Winston-Salem State–held a sit-in at Woolworth’s and were arrested for trespassing. The students’ nonviolent protest, along with other protests occurring in Winston-Salem, led to a desegregation agreement signed on May 23 by the city and local businesses. Matthews was the first black served at a desegregated lunch counter on May 25. The protest ended in 107 days. Winston-Salem’s protest movement began shortly after the more famous Greensboro sit-in, but the issue was resolved faster in Winston-Salem.

The students “sat their ground” and by doing so, “the city became a leader in the civil rights movement,–allowing citizens to exercise their rights without being condemned to discrimination because of the hue or color of their skin,” Cavanagh said.

Paul Escott, a professor of history at Wake Forest and dean of the undergraduate College, also spoke during the dedication ceremony.

“Let us honor not only the individuals who staged the sit-ins, but the ideals that guided them,” Escott said.

“Under the leadership of Dr. Martin Luther King Jr., the civil rights movement trumpeted a profoundly religious message. Protestors like those we honor today, honor not just the political ideals of freedom and democracy, but also the religious ideals of justice and love for one another,” Escott added.

“One day, predicted Dr. King, the South will recognized its real heroes. They will be the young high school and college students courageously and nonviolently sitting-in at lunch counters and willing to go to jail for conscience’s sake. One day, Dr. King said, the South will know that when these disinherited children of God, sat-down at lunch counters were in reality standing up for the best in the American dream and the most sacred values in our Judeo Christian values.”

The dedication ceremony concluded with the unveiling of the historical marker. The marker’s inscription reads:

“On February 8, 1960, Carl Wesley Matthews began the city’s sit-in demonstration alone at lunch counters near this site and was soon joined by students from Winston-Salem Teachers College, Atkins High School, and Wake Forest College. The nonviolent protest led to a desegregation agreement signed May 23rd by the City and local businesses. Mr. Matthews, the leader, was the first Black served at a desegregated counter on May 25th. The protest ended in a record 107 days.”