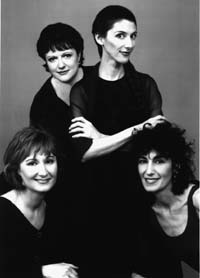 The concert begins at 8 p.m. in Wait Chapel. A pre-concert lecture by Kimberlea Daggy, music director at WFDD (88.5 FM), will begin at 7:10 p.m. in the Balcony Room of Wait Chapel.

Titled, “1000: A Mass for the End of Time,” the program will focus on French and British music from the year 1000. The a cappella group will interweave medieval and Renaissance choral music with poetry and narrative. To celebrate the millennium, Anonymous 4 looks back a thousand years to a time of intense creative activity in Christian liturgy and music, when many new works were composed to enlarge the Gregorian chant repertory.

The New York Times described Anonymous 4 as “excellent at caressing the subtleties and shaping the overlapping lines into shimmering, sensual and arching spans of modal music.”

The four women of Anonymous 4 – Jacqueline Horner, Marsha Genensky, Johanna Maria Rose and Susan Hellauer – formed the group in 1986 to experiment with the sound of medieval chant and polyphony. The group is named after four anonymous writings in a series of ancient music manuscripts published in France in the 1860s.

Anonymous 4 has appeared on NPR’s “Performance Today,” “CBS Sunday Morning” and Garrison Keillor’s “A Prairie Home Companion.” The group’s recordings have sold nearly one million copies worldwide, and all have reached the top 10 on Billboard’s classical chart.

Tickets for the concert are $18 for adults, $13 for students and senior citizens. They are available through the university theater box office at 758-5295. The box office is open weekdays from noon-5:30 p.m.