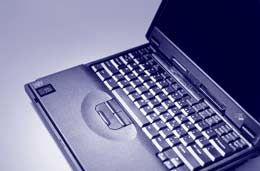 Four years ago, Wake Forest University freshmen arrived on campus as the first class to be provided with laptop computers. This year’s freshmen, as well as returning students, benefit from another development in Wake Forest’s comprehensive technology initiative-wireless access to the Internet.

“We’ve reached a number of our technology goals, including putting an IBM ThinkPad into the hands of all undergraduates, wiring every building for Internet access, and installing multimedia equipment in classrooms campus-wide,” said Jay Dominick, Wake Forest’s assistant vice president for information systems. “Now, we’re ready to offer students wireless access to the Internet.”

“Our goal has been to make it available in those areas-outside classrooms-where students often study,” Dominick added. Wake Forest has set up the hardware to enable wireless access in 140 spots on campus, including residence halls, lounges, the library and certain popular outdoor areas. The university acquired hardware for the wireless system through Symbol Technologies.

By simply plugging a wireless card-a thin, wafer-like component-into the side of their laptop computer, students can check their e-mail, access class and research materials on-line, and surf the Internet.

Since the formal launch of its technology initiative in fall 1996, Wake Forest has provided high-speed, wired Internet access everywhere on campus-classrooms and residence halls included. All classrooms are wired for the Internet, and approximately two-thirds of campus classrooms have connections at each desk. Every residence hall room has a connection for each student.

A pilot program, which ran at Wake Forest for about two months last spring, revealed that students liked the mobility that wireless access provided. Approximately 700 students participated in the pilot.

“Students tend to be on the move on a college campus,” Dominick said. “They study all over campus, often with classmates and friends in a variety of locations.”

This summer, more than 600 of approximately 1,000 freshmen applied in advance for wireless access; more are expected to sign up after arriving for orientation on Aug. 23. Sophomores, juniors and seniors will apply for wireless access when they arrive for the Aug. 30 start of the fall semester. Students will pay a fee to go wireless: $80 per semester or $140 per year.

“In a survey we conducted after last spring’s pilot, we found that students are willing to give up some speed in order to benefit from the mobility of wireless,” Dominick said.

“That doesn’t mean they don’t appreciate the fast connections,” Dominick said. “It just tells us that a number of students like an extra option.”

Wireless cards will be distributed to freshmen on Aug. 29 at the Information Systems Building. Each freshman will have received an IBM ThinkPad-and Lexmark color inkjet printer-already. Unlike the wireless service, students do not pay an extra fee for the computers and printers. The cost is included in their tuition.

Computers and printers will be distributed to freshmen on Aug. 23 at the Information Systems Building. Freshmen will attend mandatory computer orientation on Aug. 25. The orientation sessions are held in various locations on campus.

New computers and printers will be distributed to juniors on Aug. 28 at the Information Systems Building. Each junior will turn in the computer they received as a freshman, but may keep their original printer, as well as the new one. Upon graduation, students will keep the upgraded computers, as well as the printers.

Providing new printers to juniors is a new development this year. Previously, the university had planned only to upgrade computers.

Seniors will also get new printers this year, since they did not get upgraded printers as juniors.