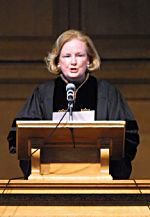 The program in Wait Chapel was part of the university’s 2000-2001 Year of Ethics and Honor event series.

Glendon is the Learned Hand Professor of Law at Harvard Law School and is the author of nine books about American society. Her most recent book, “A World Made New: Eleanor Roosevelt and the Universal Declaration of Human Rights,” will be published in March.

Glendon said she is troubled by recent polls revealing that while most Americans think the country is in a moral decline, they also report an increasing reluctance to assert their moral positions in public settings.

“In recent years there has been no shortage of self-appointed censors telling us that moral, and especially religious views, are out of bounds in the public square,” she said. “And more insidiously, we’re told, not in so many words but obliquely – ‘If you want to get ahead in politics, in business, in the academy, check your religious beliefs at the door.’ ”

Glendon said Americans need to rethink popular slogans like, “Personally, I’m opposed to [this or that], but I can’t impose my opinions on others,” and take action through example.

“When we advance our moral viewpoints, we are not imposing anything on anyone,” she said. “We are proposing. That’s what citizens do in a democracy.”

Glendon also advocated a new movement that would let nonprofit faith groups receive federal money to provide human services. She said “charitable choice” is one of the most creative political ideas in recent years and she hopes that separation of church and state issues do not hinder the controversy-shrouded movement.

“Many social services can be delivered more effectively, efficiently and humanely by the mediating structures of civil society than by government,” she said.

Glendon attended a luncheon in her honor following the morning program and then signed copies of her book, “Rights Talk,” in the College Book Store. She also participated in a 3 p.m. moderated public discussion about human rights in Benson University Center’s Pugh Auditorium.