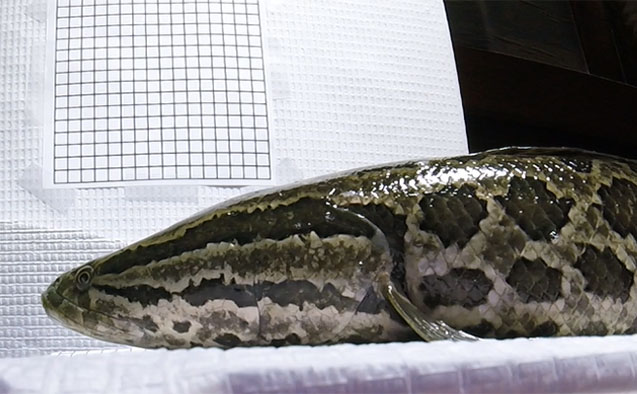 The largest fish to walk on land, the voracious northern snakehead, will flee water that is too acidic, salty or high in carbon dioxide – important information for future management of this invasive species. 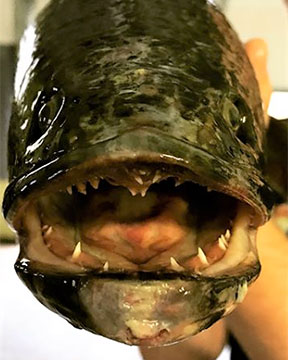 Snakeheads eat native species of fish, frogs and crayfish, destroying the food web in some habitats. They can survive on land for up to 20 hours if conditions are moist.

In a new study published Oct. 21 in the peer-reviewed journal Integrative Organismal Biology, Wake Forest researcher Noah Bressman reported for the first time the water conditions that could drive snakeheads onto land.

Earlier this month, wildlife resources officials in Georgia advised anglers to kill the fish on sight after one was caught in a Gwinnett County pond, and the Pennsylvania Fish and Boat Commission confirmed that a 28-inch northern snakehead was caught in the Monongahela River in Pittsburgh.

Bressman also observed the fish moving in a way no other amphibious fish do: It makes near-simultaneous rowing movements with its pectoral fins while wriggling its axial fin back and forth. These combined motions could help the snakehead travel across uneven surfaces such as grass.

“Snakeheads move more quickly and erratically than once believed,” said Bressman, a Ph.D. candidate and the corresponding author of Emersion and terrestrial locomotion of the northern snakehead on multiple substrates. “The fish we studied moved super quickly on rough surfaces such as grass, and we think they use their pectoral fins to push off these three-dimensional surfaces.”

Native to Asia, the northern snakehead was first found in the United States in 2002, in a Maryland pond. Since then, the fish have been discovered in the Potomac River, Florida, New York City, Philadelphia, Massachusetts, California and North Carolina.

Bressman studied snakehead populations in Maryland, where the fish is considered a threat to the Chesapeake Bay watershed. The Maryland Department of Natural Resources collected snakeheads by electrofishing in tributaries of the Potomac River and adjacent drainage ditches. The fish, which ranged in size from about 1 inch to 27 inches, were subjected to poor water conditions including high salinity, high acidity, stagnation, crowding, high temperatures, pollution and low light.

The fish tolerated all conditions but high salinity and acidity, and stagnant water with too much carbon dioxide.

Although it is unclear how often snakeheads leave water voluntarily and cross over land to invade other waterways, Bressman said these findings can inform how natural resources agencies plan to contain the fish.

“When snakeheads were discovered on land, it caused a lot of fear because not much was known about them,” he said. “Sure, they can move fairly quickly on land, and they have sharp teeth. But you can easily outrun them, and they won’t hurt you, your children or your pets.

“But having a better understanding of how amphibious they are can help us better manage their population.”

This research was funded by a National Science Foundation Graduate Research Fellowship.