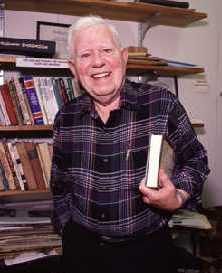 Bynum Shaw, long-time professor of journalism at Wake Forest University and author of the fourth volume of the university’s history, died at his home in Winston-Salem on Aug. 27 after an illness of several months. He was 78.

An Alamance County native who grew up in the Wilmington area, Shaw became the director of journalism and creative writing programs at Wake Forest in 1965, after distinguishing himself as a Washington and foreign correspondent at the Baltimore Sun. He retired in 1993.

The memorial service will be held at 1 p.m. Thursday, Aug. 30, in Wait Chapel on the campus of Wake Forest.

He entered Wake Forest in 1940 on a debating scholarship. Two years later, he volunteered for the U.S. Merchant Marines, returning to Wake Forest after World War II to complete his bachelor’s degree. In his senior year, he was editor of the Old Gold & Black, the student newspaper. He later spent many years serving as the student newspaper’s faculty advisor.

He started his journalism career at the Virginian-Pilot in Norfolk, Va. He later moved to the Baltimore Sun, where he spent several years as a reporter, Washington correspondent, European correspondent and editorial writer.

Shaw wrote, “The History of Wake Forest College, Volume IV 1943-67.” He also wrote four novels, “The Sound of Small Hammers,” “The Nazi Hunter,” “Days of Power, Nights of Fear” and “Oh, Promised Land.” His non-fiction books include, “Divided We Stand: The Baptists in American Life; a History” and “W.W. Holden: a Political Biography,” a book he wrote with Wake Forest professor E.E. Folk about North Carolina’s Reconstruction governor. He contributed to Esquire, the Sunday New York Times, the New Republic and many other newspapers and magazines.

Shaw was known for his intense commitment to his students, and maintained friendships with countless students long after they graduated. In 1986, he received Wake Forest’s first Jon Reinhardt Award for Distinguished Teaching.

“Bynum Shaw was a member of an important generation of Wake Forest students who went on to distinguished careers in newspapers, magazines and publishing,” said Edwin Wilson, senior vice president at Wake Forest and a long-time colleague of Shaw’s.

“He genuinely loved Wake Forest-that comes across in the history he wrote and also in his friendships with faculty and with his former students,” Wilson said.

“Bynum was my mentor, he was like a second father to me,” said Waller, who is also the author of non-fiction books on U.S. military-including this year’s “Big Red: Three Months on Board a Trident Nuclear Submarine.”

“I was always calling him, asking him for advice,” Waller said. “He always presented the ideal of what journalism should be.”

Wake Forest graduate Michael Riley, the editor of the Roanoke Times and former Time bureau chief and correspondent, was also inspired by Shaw’s approach to journalism.

“He was smart and skeptical, but never cynical, because he realized the great power of journalism-and journalists-to make the world a better place,” Riley said.

“Bynum was, in many ways, a refreshing counterpoint to the stereotype of the brash and arrogant reporter,” Riley said. “He spoke softly, thought deeply, read widely and questioned carefully. And, by example, he taught us to take the same approach to our craft.”

Shaw taught Shorter’s son, Geof, now with The Charlotte Observer, who was influenced as a student by the journalism professor.

“I told Bynum, ‘If just one student talks about me the way that my son talks about you, I’ll be a lucky man,'” Shorter said.

Memorials may be made to Wake Forest’s Bynum Shaw Prize in Journalism, c/o the Wake Forest Department of English, P.O. Box 7387, Winston-Salem, NC 27109 or by using the University’s on-line giving website. Gifts may also be made to a charity of the donor’s choice.