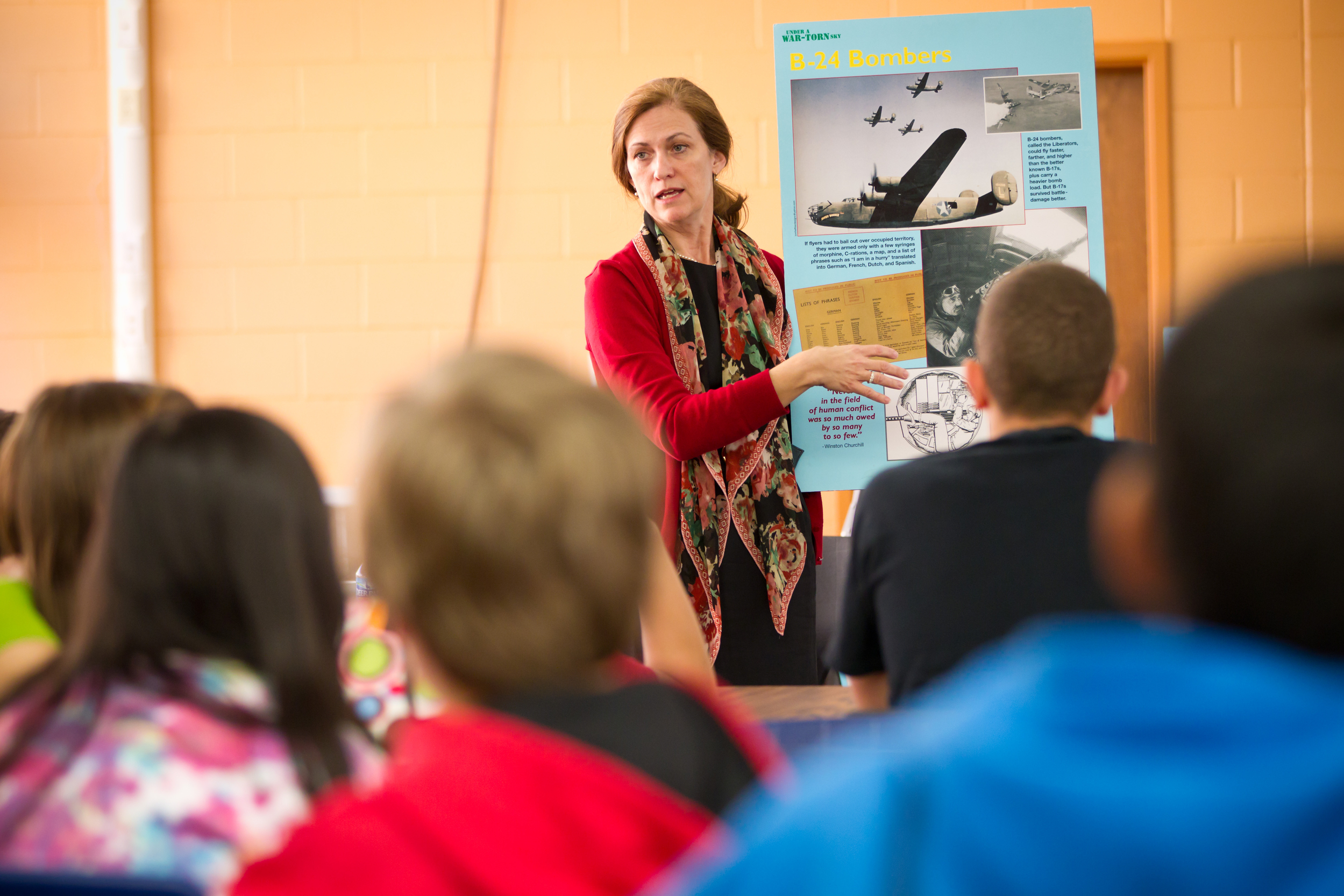 Silk maps, B-24 bombers and avoiding anachronisms were the hot topics during Laura Elliott’s visit to Northwest Middle School in Winston-Salem. Elliott, a 1979 Wake Forest graduate who writes young adult historical novels, mixed WWII history with writing advice in conversations with 6th, 7th and 8th graders as part of Words Awake! A Celebration of Wake Forest Writers and Writing on campus March 23-25.

She was among 18 Wake Forest graduates who visited local schools to share their enthusiasm for writing.

“The fun part about being a writer is you get to pretend all the time,” said Elliott, whose book “Under a War-torn Sky” was inspired by her father’s experiences in WWII. She emphasized the importance of research — the kind of detailed research that helped her capture the way WWII pilots talked, what they wore and the right kind of marble her main character should carry in his pocket. “My research process is to read and read and read,” she said. She also underscored the importance of rewriting: “Write and then go back and chisel at it like a piece of sculpture.”

Other highlights from school visits include:

At Parkland High School, Doug Waller (’71), author of The New York Times bestseller, “Wild Bill Donovan: The Spymaster Who” created the “OSS and Modern American Espionage,” shared outlines, spy-related archival documents and manuscripts with English students to give them a hands-on feel for the book writing process. Waller, who was a correspondent for Time magazine before he started writing books, said he enjoys teaching classes like the one at Parkland because it gives him a chance to get students excited about writing. “Writing a book is like writing an English paper, only on a much larger scale. And the principles you learn about writing in school — from research, to note cards, to outlining, to composition — are the ones authors use to write books.”


Malcolm Jones (’74), who writes for Newsweek magazine and The Daily Beast, and Ty West (’79), a veteran television news producer, writer and executive, teamed up not only for the long drive from New York, but also for a series of talks about writing and journalism.

At Reynolds High School,  Jones stepped into the darkened Reynolds Theater where students were performing a preview of their spring musical “The King and I.” Not only was it a curious juxtaposition, since Jones is an alumnus of both Reynolds and Wake Forest, but also because Jones makes his living writing about art, books, music and culture. So when he said, “Amazing!” about the production afterward, it was not just pride, but expertise talking. Jones shared advice he received from a mentor about interviewing famous subjects. “Make them kick you out. Don’t be polite. It’s not a social call,” he told the group. “You’re not being rude, but you’re there to talk. The best answers always come in the last 10 minutes of the interview.”

Both men talked about how journalism has changed during their careers. Sometimes for the better, such as the Internet allowing for faster and more thorough research, and sometimes for the worse – as the economy takes a toll on news magazines and daily newspapers. But both still love the thrill of the deadline. “It takes practice to write on deadline,” Jones said, “It’s hard, but it’s still kinda fun.”

Cookbook author and writer Elizabeth Norfleet (’85) visited the Winston-Salem/Forsyth County Schools Career Center to teach three cooking classes to high school culinary arts students. She stressed that good writing and communication skills are essential for chefs to progress in their careers. “When you have a creative idea, you must be able to share that idea persuasively with others, and your recipe notes must be clear for other chefs in the kitchen,” Norfleet told the students. Her classes focused on creating variations on basic quiche, muffin and soup recipes. “In both writing and cooking, you must get the basics,” she said. “In cooking, it’s about knowing how certain ingredients work together as a starting point for a variety of dishes. In writing, it’s about a strong foundation of spelling skills and proper grammar that combine to bring success in any field.”

“My name is Dovey Coe, and I reckon it don’t matter if you like me or not,” were the first words children’s book author Frances O’Roark Dowell (’86) spoke to a group of fifth graders at Cook Elementary. Every student in the room recognized the words as the opening line from Dowell’s novel they had read for their book club. She then shared the journey she took to become a writer.

“At age 29, I figured out I wanted to write children’s books for kids like you,” Dowell said. She described how she moved to the mountains of North Carolina and found work cleaning houses, while she began work on her first book, “Dovey Coe.”

She emphasized the importance of reading and of thinking like a writer.

“Keep reading all the time, even in the bathtub,” she told the students. “Those of you who love to write and those of you who don’t all need to think of yourselves as writers.”