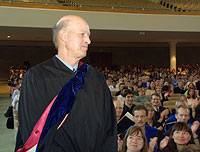 Richard Sears, Wake Forest professor of political science, was presented with the Donald O. Schoonmaker Faculty Award for Community Service. Sears was recognized for his contributions to the university and the community.

Since he came to Wake Forest in 1964, Sears has spent his free time volunteering with numerous community organizations. He is a past president of Community Environmental Action and is a member of the Air Quality Control Board and Piedmont Conservation Voters. He is an active member of Saint Paul’s Episcopal Church and its Earth Stewardship Committee. He also volunteers at the Samaritan Inn. 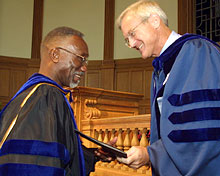 Herman Eure, chair of the Wake Forest biology department, received the Jon Reinhardt Award for Excellence in Teaching. Eure began teaching at Wake Forest in 1974. He was nominated for the award by former students. Their nomination forms included comments like, “His door was always open for anything and everything,” and “He encouraged persistence towards goals, professional and personal.” 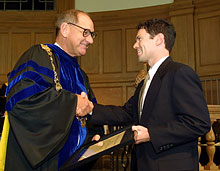 Wake Forest President Thomas K. Hearn Jr. also presented two alumni with Marcellus E. Waddill Excellence in Teaching Awards during convocation. The 2001 recipients, Jeffrey Morgan of Winston-Salem and Elizabeth Fair Goffigon of Sparks, Md., were each chosen in May to receive the $20,000 award.

Morgan graduated from Wake Forest in 1995 with a master’s degree in education. He is a high school English teacher at the North Carolina School of the Arts. 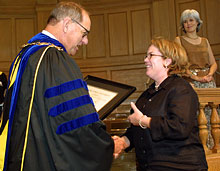 Goffigon graduated from Wake Forest in 1993 with a bachelor’s degree in sociology and religion. She is a fifth-grade teacher at Sparks Elementary School in Sparks, Md.

The Waddill Awards are given annually to one primary school and one secondary school teacher who are Wake Forest alumni. David Waddill of Rye, N.Y., established the award in 1994 to honor his father, Marcellus Waddill of Winston Salem, who retired in 1997 after teaching mathematics at Wake Forest for 35 years.