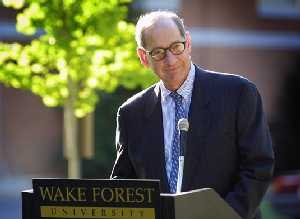 Wake Forest University held a groundbreaking ceremony Oct. 4 for an addition to Calloway Hall that will bring all operations of the Calloway School of Business and Accountancy together under one roof for the first time.

University trustees, members of the Calloway School board of visitors, and Calloway students and faculty were on hand as donor representatives, Wake Forest President Thomas K. Hearn Jr., and Jack Wilkerson, dean of the Calloway School, turned the dirt for the new wing with ceremonial shovels at the 5 p.m. ceremony. 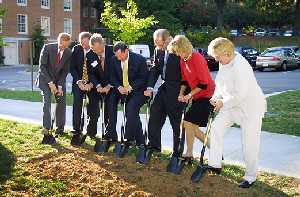 The Calloway School, ranked 30th nationally among undergraduate business programs by U.S. News & World Report and one of only two North Carolina business programs in the top 50, is the largest undergraduate program at Wake Forest. It currently shares space with the computer science and mathematics departments in Calloway Hall and has class and office space in two other campus buildings. In the last eight years, student enrollment in the Calloway School has increased by 33 percent and the number of faculty has increased by 50 percent, making space in Calloway Hall increasingly tight.

The Calloway School will occupy the entire four-story F.M. Kirby Wing, named after the F.M. Kirby Foundation for its $5 million donation. The addition will include classroom and office space, room for group meetings and an entrepreneur center designed to foster business skills in students from all areas of study. The addition is expected to be complete by fall 2003.

“This expansion will strengthen the Calloway School’s position as one of the top undergraduate business programs in the nation,” said Wilkerson.

More than 400 students are currently enrolled in the Calloway School, which offers four-year degrees in business, analytical finance, mathematical business and information systems and a five-year degree program to earn a bachelor’s and master’s degree in accountancy. The Calloway School also offers a master’s degree in accountancy for students who have already earned an undergraduate degree.