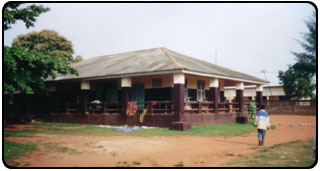 A group of Wake Forest University students are raising money to buy basic medical supplies like needles, gloves and bandages for several open-air hospitals in Benin, West Africa— including the hospital where one of their professors was born.

The idea for “Project Bokonon” came from the students’ 2001 study abroad trip to Benin. Assistant Professor of Economics Sylvain Boko, a Benin native who is now a U.S. citizen, leads the four-credit course each summer called “Current Issues in African Development.”

Students on the trip attend lectures, visit agricultural and industrial sites, and spend one week with a host-family. The students on the 2001 trip also spent time at Benin’s Pobe Hospital, an open-air facility with just three doctors caring for more than 110,000 patients. It is also the hospital where Boko was born.

Bechtel said seriously ill patients wait on benches outside the hospital, IVs hang on doorknobs or are taped to the wall, and rain drips through leaky roofs. Seeing that the hospital had no gowns for patients, few sheets or mattresses, and insects in nearly all the rooms, Bechtel and others were inspired to act. 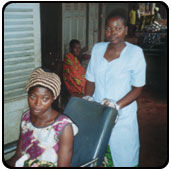 “We were driven by the fact that we saw a need,” Bechtel said. “Knowing that this was Professor Boko’s home, we had to do something.”

The student organizers are soliciting money and supplies from donors on campus and throughout the community. The group gives a Band-Aid bandage to every donor who gives $5 in a campaign they call “Band-Aids for Benin.” They have encouraged student donations by arranging for students to be able to use their university debit card for contributions to the project. They have also sponsored programs on campus about development of Benin and medical treatment in the country’s hospitals.

The students have received around $600 from Wake Forest Student Government to publicize the project. They have also applied for a grant from the university that will help in locating, purchasing and shipping the supplies. The 2002 study abroad group will deliver the supplies to the hospital when they return for the trip’s fifth year in June.

Boko, whose family still lives in Benin, says that the goal of the study abroad trip is to expose students to the economic development issues they discuss in the classroom at Wake Forest.

“To see someone come from that area and do the things that I’m doing now, the students see that if you give someone a chance, they can make it,” said Boko, who received help from an American family to attend college. “It is particularly meaningful to me to be the catalyst for this group to give back to my community.”

Previous Wake Forest groups have collected pens and pencils for Benin schools,
but this is the first group to try to institute an ongoing project, said Boko.

“What I’m seeing is that this trip is having an effect on these students,” he said. “This is what I’ve tried to teach them, to go beyond their immediate world.”

For more information on how to make a donation to “Project Bokonon,” contact Bechtel at 336-758-6226 or projectbokonon@nullhotmail.com.