A group of Wake Forest University students will travel to Mexico City on Dec. 27 as part of the Office of Volunteer Services’ annual City of Joy Scholars Program. The 11 students will volunteer for two weeks at the Hogar Pax y Alegria (Home of Peace and Happiness), one of the facilities founded by Mother Teresa’s Missionaries of Charity. The group returns Jan. 13.

“We weren’t sure how all of the events in that area of the world would affect India,” said Mary Gerardy, assistant vice president for student life and coordinator of the trip. “It was a very difficult decision, but Mexico City turned out to be the perfect alternative.”

The Wake Forest Catholic Community also will take a group of 18 students to Costa Rica to work with Nicaraguan refugees from Jan. 3-13.

Although the location has changed for the City of Joy Scholars Program, the service opportunity has not, said Jay Ford, assistant professor of religion and staff leader for trip. 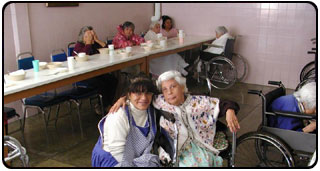 The students will be working with orphaned and disabled infants, children, teen-age girls and women. Doug Pulse, student leader for the trip, said the volunteers’ responsibilities will include cleaning beds, feeding the residents, playing with the children and doing repair work around the home. The students will also take pens and paper, and toiletries like Vaseline, diapers and lotion to share with the women and children.

“There aren’t many international volunteers that come to the Mexico City Missionaries of Charity,” said Pulse, a senior Spanish major who was part of an advance team that visited the home in November. “It was exciting to put this new trip together and possibly be the pioneers of a new legacy of service for Wake Forest.”

Gerardy said the service trip to Mexico City might become an annual experience, adding to the Wake Forest Office of Volunteer Services’ three existing service trips to destinations around the world— Honduras and Calcutta during winter break, and Tiblisi, Georgia in the spring.

The City of Joy Scholars Program plans to return to Calcutta next winter break.