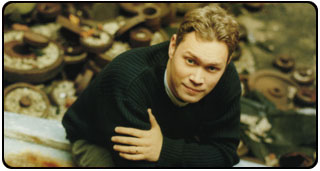 Tickets are $12 and are available in Room 335 of Wake Forest’s Benson University Center, at the Master’s Loft in Winston-Salem and Greensboro, or by phone at 336-758-4869. The concert is sponsored by the Wake Forest Student Union.

All proceeds from the concert will benefit Wake Forest’s 30-Hour Famine, a program where students get sponsors for fasting for 30 hours. All money is then donated to World Vision, an international Christian humanitarian organization that assists children in struggling communities with food, education, health care and vocational training. Approximately 100 students are expected to participate in the fast, which ends the evening of the concert.

Peterson’s first national single,”Nothing to Say,” became a top 10 single on the adult contemporary chart and was one of the 25 most played songs on Christian radio in 2000. The song’s album,”Carried Along,” was named one of the top 10 albums of the year by CCM Magazine. The album also earned three top 10 debuts in its first week and ranked on the Billboard Magazine Internet Sales chart above Red Hot Chili Peppers, Sting and Backstreet Boys.

Peterson’s latest album,”Clear to Venus,” was released in 2001 and has received critical acclaim from mainstream and Christian media. The Dallas Morning News wrote,”Andrew Peterson’s ‘Clear to Venus’ is more absorbing on many levels than 90 percent of what’s on the record shelves these days.”

Webb has shared the stage with artists like Sixpence None the Richer, Vigilantes of Love and Shawn Colvin. His set will feature songs from Caedmon’s Call albums and from his solo performances.

Chi Rho is in its 11th year at Wake Forest. Organized by two students in 1991, the group often sings for university and community events like weddings, church services and basketball games. The group has also performed at the National Cathedral and the White House.
For more information, call 336-758-4869.

Editors’ Note: To arrange an interview with Peterson, contact the News Service.