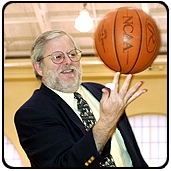 Whether they win or lose a game, coaches follow a predictable pattern of talk in post-game media interviews, according to a Wake Forest University professor. He calls it coachtalk.

“After a while, if you listen to enough coaches, you begin to think you’ve heard it all before,” says John Llewellyn, as associate professor of communication who has studied this topic for nearly two decades. “And the odds are, you have.”

Llewellyn analyzed the professional vocabulary of Division I men’s college basketball coaches for “Coachtalk,” a chapter that will appear in the book “Case Studies in Sport Communication,” scheduled for release this year by Praeger Press. Llewellyn’s research revealed four recurring themes that both winning and losing coaches employ. “Coachtalk” discusses their use and examines the reasons behind them.

Llewellyn says coachtalk reveals an underlying respect and regard that coaches have for each other and for the social world of athletics— a world where competition can be fierce.

“This is the talk that sustains the culture of sports,” Llewellyn says. “As a coach, your job in life is to beat your mirror image; coaches understand and respect each other’s reality.”

Llewellyn studied newspaper reports of post-game comments made by the winning and losing basketball coaches in 12 National Collegiate Athletic Association men’s national championship games every other year from 1976-2000. He soon saw a pattern in what the winning coach and losing coach said after every game.

Winning coaches elevated all aspects of the game, while remaining humble. They also reinforced the traditional values of sport, while acknowledging their suffering throughout the season.

Losing coaches deferred to the winners, while subtly giving their fans an alternate definition of winning like, “It’s just an honor to be here.” Losing coaches also often credited the outcome to fate, while acknowledging that they suffered from the loss.

“Fans want the coach to explain things in terms they can understand,” Llewellyn says. “The scoreboard is only the beginning. Giving flavor to the outcome is how you make it as a coach.”

Llewellyn points to Georgetown University’s John Thompson after the 1984 championship game against the University of Houston as an example of expressing excitement in the context of humility: “The biggest thing that leaps out in my mind is all of the people, particularly of my race, who I felt never had an opportunity to experience what I have,” Thompson told reporters after the game.

Many winning coaches also confess the suffering it took to get to the top and adopt a “winning is not everything” attitude, Llewellyn says. However, he points out that the rhetorical rules of coaching, which he calls coachtalk, mean that only winners can say that winning is not everything; others who make the claim show a defective attitude.

The most consistent theme with losing coaches is acknowledgement of the winner, or deference, says Llewellyn. Deference not only acknowledges the winner but also shows the losing coach’s respect for the social order of competition.

Johnny Orr, former coach at the University of Michigan, illustrated it in 1976 when his team lost by 18 points to Indiana University. “They are a great team. There is no doubt they are number one,” Orr said after the loss.

Llewellyn also found that losing coaches are in the position of justifying on-court judgments, often in terms of fate.

University of Houston coach Guy Lewis said, “We tried several different presses, several different offenses and defenses, and just couldn’t get over the hump,” after his 1984 loss to Georgetown University. After a loss to the University of Louisville in 1980, former UCLA coach Larry Brown told reporters, “We had our chances and we had a lot of good shots early that wouldn’t go down.” Both coaches subtly attributed their defeat to forces beyond mortal control, Llewellyn says.

Losing coaches also redefine the loss, providing an explanation for the heart of the fan— not an accounting for the numbers on the scoreboard, Llewellyn says. In 1996, following Syracuse University’s loss to the University of Kentucky, coach Jim Boeheim said, “Too much is made about losing, but to my way of thinking we didn’t lose anything tonight.”

Llewellyn says the “Coachtalk” chapter gives an explanation for what most sports fans have noticed for years.

“The meaning of winning is constructed and re-constructed with each win or loss,” Llewellyn says. “Coachtalk is really a social system where both sides—winners and losers—talk in a way to create and maintain each other.”

Llewellyn, who joined the Wake Forest faculty in 1990, became interested in the concept of coachtalk as a college student when his school’s football coach talked his way through 12 consecutive losses. He started his initial research in 1985, when he was working on his doctoral degree at the University of Texas at Austin.

However, Llewellyn admits to observing the phenomenon of coachtalk much earlier, when as a high school basketball player his team earned a 2-19 overall record.

“The beauty of that experience is that I have two wonderful and clear memories of that season,” Llewellyn says.