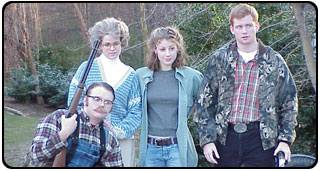 Wake Forest University Theatre will perform Sam Shepard’s “A Lie of the Mind” Feb. 20– 24 in the MainStage Theatre in Scales Fine Arts Center.

The drama tells the story of two families connected by a violent marriage who struggle to make sense of relationships that become increasingly disturbing and dangerous. Praised for its depth and humor, the play has won the New York Drama Critics Circle Award, the Outer Critics Circle Award and the Drama Desk Award.

Carrie Wood, a student at the North Carolina School of the Arts, is the light designer.

Tickets are $12 for adults and $5 for students. They can be purchased at the door or by calling the Wake Forest Theatre Box Office at 336-758-5295. Reservations are encouraged.